The Life of an Unknown Predator 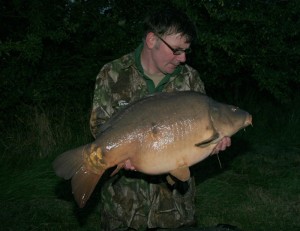 Recently I was on an angling forum where someone suggested that maybe we should spin for Carp with artificial lures. Of course, initially the guy got rubbished as being a ‘crackpot’ until I could stand no more. I posted on there that I had countless examples of Carp falling for fish as bait. I also relayed some unusual experiences that had happened to me.

I can clearly remember as a spotty youth, about 100 years ago, keeping a Koi Carp in my hot water aquarium. I had acquired Mr Koi as a present and slipped it in with my extensive stock of Guppies, Black Mollies and Neon Tetras; all small fish an inch or so big. I had approximately a hundred of these fish and so my large tank had the look of a scene from Jacque Cousteau’s adventures! Can you imagine my horror when over the course of a month there was not a single small fish left in the tank. Suffice to say Mr Koi had grown significantly and swam around with a constant grin on his face! He’d scoffed the lot. This experience was something that I have always remembered. 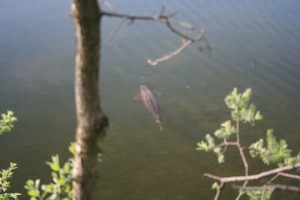 Over the years in my Carp life I have lost count of the amount of times I have seen Carp chasing small fish around. To such an extent that on a few occasions I have fished small fish to try and tempt them. One fish in particular I used to watch quite frequently. He was an aggressive male Carp and I was lucky enough to catch him a couple of times. He was a large Carp and was an upper 30. The last time I caught him he weighed in at 37lb 8oz and was a real beast. He was so easy to spot as he always pushed the small shoals of silver fish onto the shallows.

I can clearly remember spending a hot spring day watching him feed on silvers most of the afternoon. I actually took pictures of him chasing fry. My feeble attempts to catch him on floaters were just that…feeble. The only interest I got from him strangely enough was when inching the mixer on the surface. He came up a couple of times and shied away at the last minute. I was convinced the movement attracted him but on closer inspection he knew it was no small fish. However, being the persistent so-and-so I am, I caught him that night near to the drop off close to the shallows where he had been feeding. What did I catch him on I here you ask…a dead bait? No I caught him on a fishmeal boilie that was heavily flavoured with seafood extract. 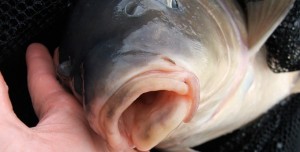 I believe clearly that the taste of the boilie was to his liking but more relevant at night the predatory basic essential, vision, was not there. Therefore he could not herd fish as easy in the darkness and resorted to more conventional feeding. I went on to catch him twice and you’ve guessed it both times on the same bait in total darkness.

I have also lost count of the amount of times I have caught big Carp that have regurgitated dead fish whilst being unhooked or retained. In fact it always amazes me that this surprises anglers. A small fish is simply food to large Carp, simple as. So is it viable to try and catch Carp by design on dead or live baits?

For me the answer is a simple no. Why? I feel they are not selective enough. Those of us old enough to remember will liken selectivity to using boilies for the first time. The attraction of boilies is 9 times out of 10; it is a Carp that bites. However with fish as bait it could be any number of fish. As with all bait approaches I think it is important to remember why you are doing something and tailor your attack accordingly. Waters with a large head of silvers with few predators tend to be the best option for fish eating attempts. Clear, shallow water with little or no weed during the spring meets the criteria exactly. Think, little weed for fry to hide in. Clear water makes it hard to hide too and the shallow waters means the Carp will be at a level similar to prey fish. The relevance of spring is that there will be an abundance of small fish spawning and after over wintering the carp need energy…and lots of it. 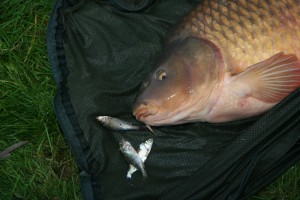 I have tried chunks of fish for Carp and have only been successful on fish bits. One night I was fortunate enough to catch a couple of 20’s that took a chunk of Roach. Was I fishing for Carp with them? I would love to say yes but I was fishing for Eels and therein lay the real problem. Going against what is accepted as the norm. It is tough to do this but let me leave you with this thought.

Does anyone wonder why zigs are so successful at certain times of the year? It is because the Carp are feeding in an area between top and bottom that prey fish swim in. Rarely do Carp come across anglers’ baits at this level and so many times I believe they are prey feeding. Perhaps a small fish suspended mid-water under a float could come up trumps? I will let you know this spring!

February / early March is always the coldest part of the winter, particularly this year. The bank sides have been frozen for weeks and this keeps water’s edge temperatures, a degree or two lower than everywhere else. The new Chub Cloud 9 Sleeping Bag system, which incorporates a 5 Season Sleeping Bag, Thermal Sleeve and Fleece Cover is absolutely brilliant. More importantly in the poor economic climate, it is great value for money at £84.99, £69.99 and £39.99 respectively. No need to break the bank to keep warm. I know I wouldn’t venture out this time of year without one.

See you on the bank, Holmesy