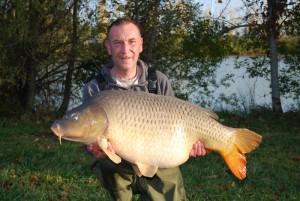 To keep it topical for the time of year my first article in The Session will be about floater fishing. I love this style of fishing and it suits my short sessions during the week.

After walking around the lake for the third time today, I must have spent around two hours perched up a tree in the top south east corner of the lake, mesmerized at the sight below me. Over the two hours I counted eleven different fish visiting a neglected shallow weedy bay away from the main swims on the lake. Three of the eleven were easily recognizable and all well over forty pounds. All were mirrors, one with a small line of tiny scales that ran diagonally from the back of its dorsal down to the base of its tail. This fish is called The Lost Mirror due to the fact it avoided capture for two and a half years and was rumored to have died. At the last capture, The Lost Mirror came in at forty one pounds and twelve ounces. The other two Carp were considerably larger across the shoulders, both fluctuating around forty seven pounds depending on the time of year that they are captured.

The problem with this area of the lake is that you have no access to the waters edge due to the bushes, brambles and overhanging branches and, more importantly the owner does not want anything cleared and you are only allowed to fish from the swims provided. With the bushes and overhanging trees you can’t actually cast directly into the bay. Seeing these fish, especially The Lost Mirror, which has avoided my hook for the past five years that I have fished the water, was just too much of a temptation.

I walked back to the swim to collect a few free offerings, shinned back up the tree and dropped a handful of baits into the hole in the weed where the fish had been visiting. I made myself as comfortable as I could, making sure I had a clear view and waited for the fish to return. It sounds text book so far. I didn’t have to wait long for the first sighting as a long dark mirror approx mid thirty emerged from the deeper water up into the warmer upper layers. Behind it came two smaller fish, one was a common. ‘Here we go’ I thought, ‘let’s have a look at their reaction to the baits’.

They should have up ended and all the baits disappear in a cloud of silt, but they obviously didn’t read the same books as me. As The Long Mirror approached the hole it stopped dead in its tracks, its pectoral fins flipped out and it took a sharp exit, stage left. That was not meant to happen. The two smaller fish both looked agitated, skirted the edge of the hole and again disappeared into the weed. Over the following hour seven fish came into the area, these fish had all been perfectly happy to lie in this hole and sun themselves all morning, up until I had placed about six halved almonds into the spot. With a reaction like this I started to wonder how the hell we actually catch any Carp, this was just six baits on their own, not even a rig or line to spook them! Time to move onto plan b.

As I walked back to the car to collect my floater gear we had a light breeze blowing into the bay. I fired a couple of pouch full’s of bait out beyond the hole and waited for the baits to drift enticingly over the weed and into the bay area, Where the hell did all the birds appear from? If I didn’t have bad luck I’d have no luck at all. This time I jumped in the car and drove to the local village store where I grabbed a bag of dog biscuits and a couple of loaves of bread. I stood in my swim and threw out the slices of bread and handfuls of the biscuits. The majority of the birds from the bay appeared in about two seconds flat, after about twenty five minutes the birds were full and had lost interest in the floating dog biscuits. 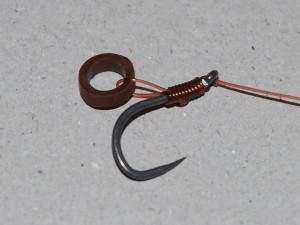 The way I tie and present a floating bait

I set up my floater gear which consisted of a through action two pound test curve rod and eight pound line. To attach the bait I use a kind of knotless knot but, instead of a hair, I make a loop through a latex bait band to secure the bait. I repeated my earlier actions of allowing the free baits to drift into the area, this time no birds, great. I deposited about a kilo of large floating pellets up wind of the bay, climbed back up the tree and waited and watched. With the slight ripple on the water now making the light reflect back a lot more than earlier in the day, it was more difficult to make out which fish was which, however the physical size of two of them gave them away. These two were double the size of the three others in the group, all lying on the far side of a weed bed behind the clear hole.

The first of the free offerings to arrive were all ignored, just drifting inches above their heads. After about ten minutes a couple of smaller fish appeared out from the weed, one rose up to the surface and that lovely sound rang out “slurp” one floater down and only five hundred to go. Holding back the urge to cast in is not easy; this is now the time to wait. I have seen this so many times as the first floater is taken and the angler immediately casts to it, spooking the fish away. Anyway this smaller common rose again and again, gently sucking the baits down through the surface film. This action encouraged two others to start to feed. What a sight only feet below me, totally unaware of my presence, one of the big girls fins started to waft gently back and forth agitated at the actions of the others around her. She sank lower in the water and then to my surprise raised her head and gently open her mouth under a bait. Her lips did not actually break the surface film as the bait began to spin like a small vortex and slipped down into the cavity of her mouth. I think it’s fair to say that at that point my heart was pounding in my chest and my legs were trembling – not great when you are perched thirty feet up a tree. The pellets were now beginning to run out and I carefully descended the tree, crept back to the swim and deposited another kilo of pellets upwind. 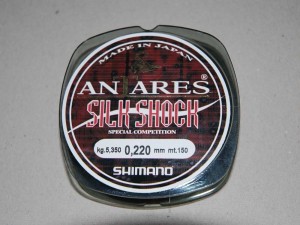 As I walked back to the tree I noticed that I could not actually cast to the area that the fish were feeding due to the overhanging branches. If I could get them to take the pellets another fifteen feet towards the mouth of the bay I may then have a chance. The fish were now taking the surface baits more confidently and, as I looked down out of the corner of my eye I saw The Lost Mirror purposefully moving into the target area. With no hesitation whatsoever she up ended and three pellets disappeared on the bounce. That was it I just could not resist the urge any longer. I had one chance and this was going to be a time when the first cast would either spook them or hopefully they would be preoccupied on feeding not to notice the nearby disturbance.

The cast was far from perfect, instead of feathering the controller down to just lay it down, it dropped a bit short and heavy, spooking one of the fish. As luck goes I did alright in the time it had taken me to prepare and cast however, the fish had moved out slightly to meet the incoming food supply. As my bait drifted into the target area I would only have about a minute in the feeding area before the line would snag the overhanging branches. I looked through my binoculars at the feeding fish. The big girl gave away her presence by the way she fed, baits spinning then disappearing below the surface. I was now totally focused on my hook bait, praying to the Carp gods that this will be the day. A pair of lips rose and engulfed the pellet but the line did not tighten, the float did not move. Strange. I’d only been watching the wrong pellet, mistaking the one that had disappeared as my hook bait, now what? 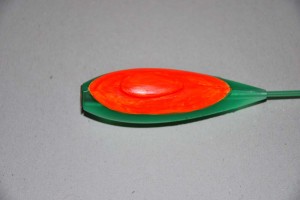 I dare not move the float it was now into the feeding area the line was now only inches from the overhanging branch. The line now rested on the branch, I just had to give a few more seconds in the spot. I kicked off my shoes, removed my trousers one handed and stepped into the cold water. Each step out would decrease the angle to the bait, just a few more precious seconds. I knew that as soon as I retrieved the float the disturbance would spook the fish. As any man will know we have an in built temperature sensor which is placed between the top of your knees and your waist if you know what I mean and this is not made to go into freezing water, but hey ho needs must. That next step went from two feet deep down to approx four feet, going from a firm bottom into silt. The intense cold took my breath away. At that exact second there was a massive eruption from the bay. I’d allowed the rod to drop and the line slacken as I took the dip into the deeper water, something had spooked the fish. The line suddenly tightened to the rod tip, pulling it around into full compression, the fish attached to the other end bow waved out of the bay, spooking all around. The water erupted as all the fish panicked and tried to vacate the area. Now in control (lol) I coached the fish across the bay to the awaiting net, expecting that slow methodical pumping feeling you only ever get from a large Carp – it didn’t happen. With its head covered in weed she rolled into the net, all eighteen pound of it. All the big fish in the area and I managed one of the smaller ones!

I’ve just walked back to my bivvy, dried off, put the kettle on and decided that this short session would be the material for this article, heart to heart as it happened and from the bivvy. Reading this back I reflected on what could have been and could I take any positives out of the situation?  On the plus side I still have The Lost Mirror as a target fish.