Spring At The Kingfishers 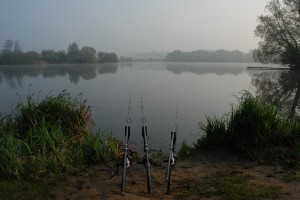 This April has proved one of the most spectacular months ever at the Kingfisher Fishing Club. Whilst, rather bizarrely, the Tench haven’t fed particularly well, the Carp have been on the rampage. I’m not going to stick my neck out and calculate exactly how many big fish – over twenty-five pounds, say – have been taken in the last three weeks but it’s an enormous number. If we look at one of the members alone, he has had over twenty fish, including eight over thirty. This is absolutely top-notch Carp fishing. On somedays, it’s not unusual for ten big fish to come out, at least half of them in the low to mid-thirty pound bracket. And, this spring, the fish are weighing light as well. Recognised thirties are often two or three pounds down on their normal weight. 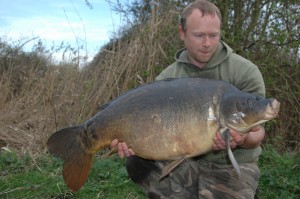 This is almost certainly because of the cold winter. In all probability, the Carp were all but comatose for several months and it’s quite apparent now that they’re feeding hard to stack on the weight before spawning in a few weeks time. This is making them extremely catchable and, given the high calibre of the angler at Kingfisher, many of our members are cashing in.

The fish are looking fabulous. Many still have that dark mahogany sheen that winter gives many Carp. Over and over, all of us are gawping at the condition and coloration of these spectacular fish. It is a fact here that the Kingfisher Club members do appreciate the fish for what they are. Beautiful creatures. Pounds and ounces do come into it but I would say that weight is no longer paramount. So many of the anglers are content just to wonder at the fish they catch and admire them for every detail. It’s a really nice part of being an angler here to witness the sincere congratulations of all around when a superb fish is caught. 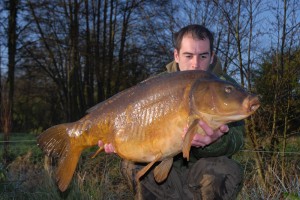 It’s true that we are recognising a high percentage of the fish that are being caught but other fish that are coming out are something of a mystery. I personally witnessed the capture of four good thirties, at least, (can there be a bad one!) that no-one in the assembled crowd can actually place. This is excellent of course: it gives that dash of jeopardy, that element of the unknown that all real anglers relish so much. It makes me at least wonder about the potential of the top weight in the fishery.  We all assume the best fish here – or at least the biggest – is the well-known forty pound common but one or two of us are beginning to harbour doubts. I’ve personally fished enough small pits to know that even in two or three acres a mammoth fish can survive unguessed at and live a life of total secrecy. 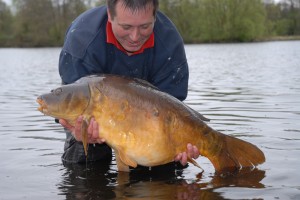 Another consideration I’ve hinted at is the success or failure of the lakes Carp population during the spawning season. There’s a general feeling that perhaps we have a preponderance of males and not enough big females. It’s true that we’re not far from the North Norfolk coast and, frequently, a biting north easterly will come in at some stage shortly after spawning and, presumably, plummet water temperatures. This April though, there are indications that spawning could be more successful than we’ve been thinking. For example, at least two or three fish in the four to six pound category have emerged – and, it has to be said, looking exactly like miniatures of the glorious big fish that the lake holds. These are almost certainly grow-ons, fish that we simply yearn to see succeed. 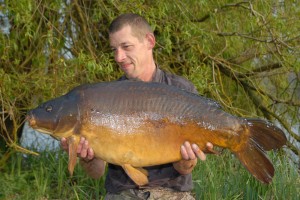 There’s another indication that perhaps the fish spawn successfully. Every year at around this time, a few long, wild-looking commons are caught in the high teens and low twenties. Once again, there’s no indication of these having been stocked in recent years and the suggestion is that once more they are natural to the lake. It’s all highly exciting stuff and it hints at a richness and fertility that even we haven’t previously guessed at. 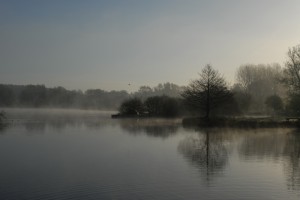 Though a lot of big fish have been caught, I must stress that it hasn’t been easy. Can there be another twenty-odd acre lake where the Carp are so unpredictable in their movements, many of us wonder? The best of our guys spend a huge amount of time physically watching for fish before setting up a pitch. They’ll watch throughout the session, too, often decamping two or even three times. This is hard work and can be exhausting by most Carp fishing standards. Remember, too, that virtually all our anglers are normal guys. They’re juggling their fishing with jobs, family, kids and all the usual commitments that come between Carp and modern life. For these guys, their fishing has to be really focused because they don’t have the luxury of sessions that can be virtually endless. These anglers work hard for their results and that’s what I personally identify with. Big, beautiful Carp and each and every one thoroughly deserved.

Next up in The Session, I will be looking at the Carp as they spawn and be debating the ethics of fishing during this period.