Over the past 6 years I have been living in the North East of England (the frozen north) which can be hardly classed as the Mecca of Carp fishing – this is fluff chucking territory (game angling) which unfortunately doesn’t really interest me.

However, over the past few years I have done lots of research on the area in the hope that I will find a local Carp water but nothing seemed to float my boat. Having travelled all over the country for magazine articles most of the waters I have fished are not always my ideal cup of tea for my own fishing – they are ideal for catching a fish for a feature but not where I would like to spend time targeting fish.

So this year I had a dilemma. My plan was to take a step back from the magazine work, to do more of my own fishing and catch a few fish for myself on my own terms. I had already got tickets for a couple of syndicate waters; one in Thatcham and the other in Bedfordshire which, although were not exactly 5 minutes down the road, as most of my fishing would be done on weekends it would mean travelling quite a distance. However, I finish work at 3.15pm on a Friday and, as long as I can miss the traffic it’s not too bad. To throw another spanner in the works my Bedfordshire syndicate was fished on a weekend on, weekend off rota so I could only fish every other weekend and there was a draw for swims at midday on every Friday. 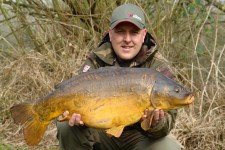 First fish of the year

To get to my Thatcham syndicate it could take me anything from 5 to 6 hours depending on traffic – a and 640 mile round trip, and to my Bedfordshire syndicate a 540 mile round trip. I am knackered before I get there but you have got to be in it to win – I won’t catch anything sat in front of the TV.

But after the long hard winter I was gagging to get out. Spring however never seemed to come and I gave in early and had a quick overnighter on a water in the midlands. I blanked but it was good to get the rods out again.

So with everything loaded in the car on Friday I headed down to Newbury. It was dark when I arrived but I set everything up and got the rods out not expecting much to happen. I redid the rods at first light fishing tight to the snags, nothing showed and there were no liners. This carried on into Sunday – the lake just hadn’t woken up yet with only the odd fish being caught.

Just as I was packing up and feeling very disappointed the rod fished tight to the snag pulled the bobbin up to the top and bent the tip around. After a brief battle my first fish of 2011 was sat in the net, a scraper 20 but I didn’t care about the weight, it was immaterial.

My next trip was the following week. More of a recce trip, it was my first session to my Bedfordshire syndicate which I had a ticket for 3 years but never got around to fishing. I didn’t hold up much hope of catching as the venue has only given up 4 fish since the start of the year but I gave it my best shot and, after 48 hours without even seeing a fish I headed back up the A1 with my tail between my legs. It was a good learning session. 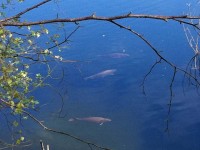 Fish in the snags

Soon after and very out of the blue a water closer to home popped up on my radar. Only an hour from where I live the small venue held fish over 30lb which is a big fish for the area.  So the following Friday I thought I would try my new found venue. Being only three weeks after the start of the new season I thought I would be quiet but there were four other people already on. Obviously this wasn’t ideal on such a small water so I spent two hours looking around the venue to find 50% of the stock sat in the back of the snags. 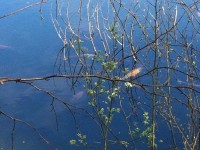 Fish on the northern venue in the back of the snags

I decided to fish the swim on the entrance to the snags but still wasn’t happy with my swim choice. The following day as the fish seemed to be exiting the snags from the opposite side to where I was fishing I decided it was time for a move, and I packed up and lugged my gear around to the other side of the lake. 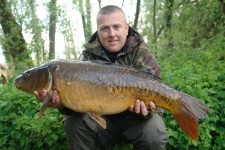 First fish of the session

I managed to position a couple of Chod rigs at the entrance of the snags. I would love to say everything went to plan but the following morning at 5am I had a take on the entrance to the bay I was fishing. My rod locked up but the fish kited on a tight line in front of the snags and within a matter of seconds it cut me off on underwater snag. I was gutted; nothing else occurred so after I had packed up I spent a bit of time watching the fish in the snags and in the out of bounds area. I spotted the fish I had lost, a scraper 20 as it still had the white cell pop up hanging out of it mouth – at least it wasn’t one of the bigger fish I had lost.

A couple of weeks passed before I could get out again. This time I was heading down to Thatcham with the missus, Lucy. Lucy is a true game angler at heart but doesn’t mind dipping her toe into other disciplines. I feel quite lucky to have a girlfriend who enjoys a similar passion to me. 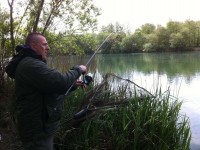 I ended up the other end of the lake after seeing a couple of fish showing. The lake had been fishing patchy and the following morning I lost a fish when the mainline parted when trying to turn the fish away from the snags. I thought it was going to be one of those sessions and I was up for another blank when out the blue the left hand rod screamed off and, after a short battle a 20 was in the net. As I was unhooking the fish in the net the left hand rod which was fished locked up was trying to wrench off the buzz bars. After managing to steer the fish in to safety I had to get Lucy to set up my spare net and another 20 was sat in the bottom of it – it’s a good job I always carry two nets! 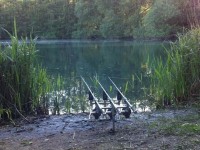 Just before the action started

The action didn’t stop there as whilst Lucy was taking some photos of the fish the remaining rod signalled into life, but this time the fish managed to dump the hook in a snag and escape to safety. After I had managed to sort my bombsite of a swim out I topped the session off with an upper double and then let Lucy have the last take which turned out to be a low double.

The following week I took the Friday off work to travel down to Bedfordshire for a 72hr session. It was a 5am start to be there for the midday draw. I managed to come 6th out of 10 in the draw and got what I thought was a half decent swim that had done a few fish recently.

I sorted out my rods, cast out 70 yards towards a visible bar/ plateau but for the first 24hrs I didn’t fish effectively. My spodding was all over the place and I just knew I wasn’t going to catch anything. I had only seen the odd fish show but nothing near my baited area. 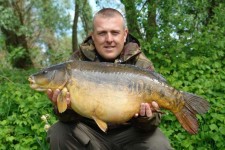 Second fish of the session

The next day was completely different and everything seemed to go to plan. The rods were out all spot on but nothing occurred in the day. 3am that morning the rod screamed off and I was doing battle with my first fish. The fish locked me up over the back of the bar and I could feel the line grating. Luckily I had 15lb GR60 on which is very abrasion resistant. I was bricking myself playing this fish as I had not got a clue how big it was. After a 10 minute battle trying to avoid all the underwater obstacles I was glad to break my duck – it weighed 21lb 10oz but I didn’t care how big it was. After a few self take pictures due to the no sacking rule I went to bed a happy man.

The following day was uneventful until dusk when I started to see fish show around the baited area my area was slicking up and I was getting the odd liner as it went dark I was sat hovering over the rods waiting for some action. 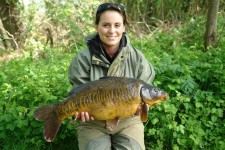 I was sat next to my rods and the indicator pulled up to the top then dropped back to its original position. I thought it must have been a liner as nothing happened for another 5minutes when I had a couple of single bleeps. After the 3rd single bleep I decided to hit it and to my surprise the fish had kited on a tight line 70 yards to my right but hadn’t taken any line. It took me a few seconds to work out what was going on and I instantly knew this was a bigger fish as it was plodding around hugging the bottom. It took me what seemed an age to land – it must have been a good 15 minutes and the old knees were knocking again. Eventually it was sat in the bottom of my net and a big sigh of relief was let out.

I sorted out the mat and scales, lifted the fish out and put it on the scales – 33lb 08oz and I was over the moon. A few self takes and I slipped her back in with a grin ear to ear. I left the rod out as I had two other rods on the spot not wanting to disturb any fish in the area. I was expecting more action but nothing materialised as fish were still showing in the area not directly over my baited area but near enough that was to be the last of the action as by 10am the fish had stopped showing and it was time for me to pack up and go home a happy man. 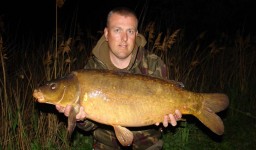 My first fish on Bedforshire Pit

So you can see, even though it has cost me a small fortune in diesel with the amount of miles I have done travelling up and down the country just to go fishing if I had not put myself out and forced myself to endure a 5 -6 hour drive to get to the venues I wouldn’t have caught half the fish I have caught. Effort really does equal rewards. 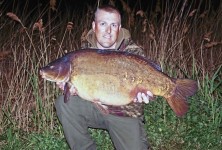