For A Limited Time Only 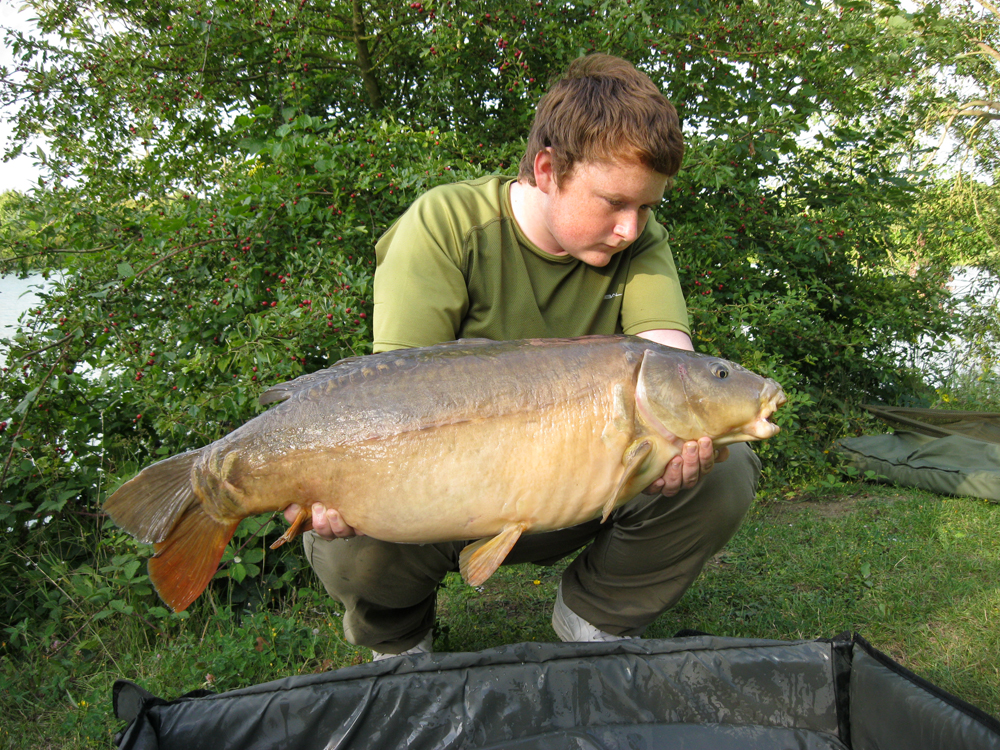 My name is Jake Kelly and it’s my 4th season Carp fishing. I started off my fishing float fishing with my dad on local day ticket venues before going onto start Carp fishing because I wanted to catch bigger fish. It was mainly runs waters and venues with a high density of Carp I fished, but now I have moved onto harder lesser stocked venues with my sights set on a 25lb+ fish. My personal best is 22lb 2oz (mirror) which was caught from a local club water.

In my 2nd season I purchased two Chub Outkast Rods and to this date I am still using them. They are superb rods with a great through action which makes them a joy to play fish on. I have changed pretty much every aspect of my set up since starting Carp fishing apart from my rods as the have never let me down.

In my first year Carp fishing I was selected for the Tony Parson’s Memorial Event held on Brasenose 1 at Linear Fisheries. I got to fish with Greys & Chub Academy member, Chris Lowe and gained a great deal of knowledge from him. I also learnt some top tips from Product Mananger, Lee Collings.

I am currently a member of two local clubs but at present can only fish days of around 12 hours because my fishing partner, my dad, has other commitments. This means I have to make the most of my fishing and being prepared and having rigs tied up, baited and ready to cast out is part of that. This enables me to have the maximum time with baits in the water. 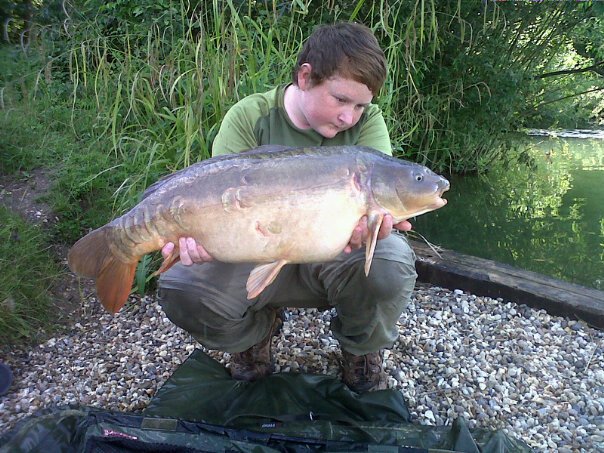 The water I’m currently targeting contains three known thirties and a good head of twenties and upper doubles. I mainly fish the car park side as it’s where I feel most comfortable and catch most fish from. On this side there are lots of overhanging trees in the margins which produce a lot of good fish. But these margins are full of snags which means you have to be on your rods as soon as you get a take. If the lake is busy the open water produces more fish, which suits me better as I like fishing open water with a scattering of scopex squid liver plus boilies. I scatter 50-100 baits with a throwing stick which means the baits are more scattered which makes the fish search around for them. I critically balance my hook baits so they act as the other freebies, the only difference is the hook baits are glugged which gives them added attraction.

I started the season off well with a low twenty pound mirror caught from the margins on the trusty liverplus and a small pva bag of crushed boilies, mixed  pellets and bait zone chilli hemp. When the fish came up from the deep margins it didn’t look a twenty, until I got it in the net and I saw its wide back and thought. this is a PB. I rolled the net up and carried the fish to my Chub Xtra Protection Cradle to unhook it before realising I had caught the fish before at 20lb 4oz  – it now weighed 20lb 12oz! The first time I caught it, it had a hole in the side so I treated it with klinik and I was happy to see that it had healed up and would live to fight another day. Fish safety to me is paramount, whenever I catch a fish no matter how big or small, I always treat hook holds and wounds with kryston klinik and fold the fins carefully against its body. 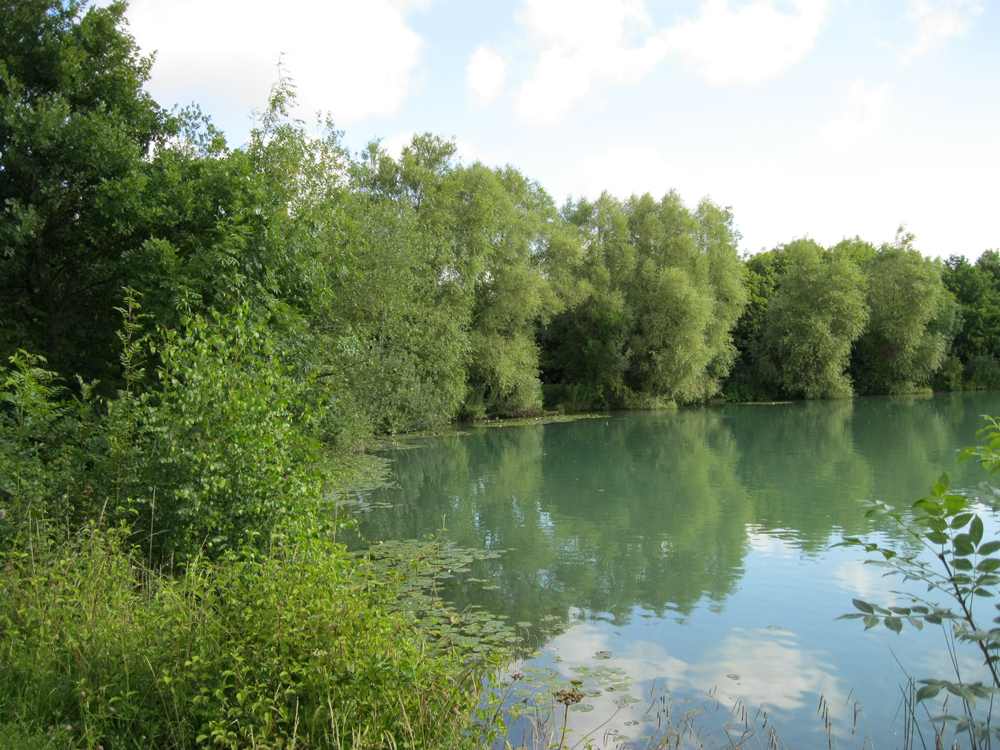 The next session wasn’t for a couple of weeks however, after my first session I was elated and couldn’t wait to get my rods out in this fantastic water. So in the mean time I decided to tie some rigs so I knew all the hooks would be sharp just in case that fish of a life time decides to gulp one of my baits.

It was the Friday before my second session and I was buzzing. I had sorted all my gear ready for getting up at 4:30am so I could get there for 6am. I opened my rig box and disaster,  I had left my rigs at home! Not to worry I thought and then the fish started to top in my area. I finally tied the kd rig and cast out. I waited 4 hours and all of a sudden my rod tore off, I leant into it and in 5 minutes I had a 16lb pristine common in my net -happy days I thought. I saw a decent fish top so decided to cast to it and within 15 minutes I had another run this time it was a 17lb mirror. I was over the moon because I was the only person to catch. I must have been doing something right I thought to myself. These fish were both from a gravel bar in my favourite swim; I fished a small pva bag with the bag mix I mentioned above.

On one of my most memorable sessions this season I was fishing the shallows in open water. I had baited up with about half a kilo of liver plus boilies, and decided to fish a stick mix which consisted of liver plus boilies and hemp crushed up. The first fish was a 21lb 14oz mirror after that catch I was confident of more fish. I saw my bobbin hit my Chub Outkast and immediately ran down the slope and struck. It started running into the lily pads to the side of my swim and I applied some side strain and brought the fish to the front of my swim only for it to dive into the marginal weed. I brought the fish up and it had a clump of weed over its face. I managed to land it and removed the weed. I then realised that it was a common of possibly over 20lbs, my heart started beating ten to the dozen. I let my dad do the honours and it tipped the scales at 20lb 14oz. It was my first 20lb common and considering there are not many 20lb commons in this lake made this capture even more memorable.

The best session of my whole Carp fishing career was when I landed a 22lb 2oz mirror. This was also on the gravel bar, but I put about 1kilo of  liver plus and fished a single hook bait with a nugget of pva foam, so I definitely knew that my rig was ready for a fish, it was about 8pm and I had a couple of beeps from my atts. I decided to investigate the bobbin lifted to the top and dropped it then lifted again. So I hit it and as soon as I did an angry Carp ran off about 20 yards. I managed to gain control and 10 minutes later she was ready to be netted. I stuck the net out as far as possible and she went over the net cord. I carried her up the bank to my cradle and tripod. I nervously zeroed my scales and lifted her onto the hook, I couldn’t look but my dad told me the weight it was 22lb 2oz. I punched the air with excitement, and shook my dad’s hand. I lifted her for some photo’s and gave her a kiss goodbye. I walked down the bank and set her free. This is my current PB. I also had a 15lb mirror as well. I packed up feeling ecstatic and overjoyed. 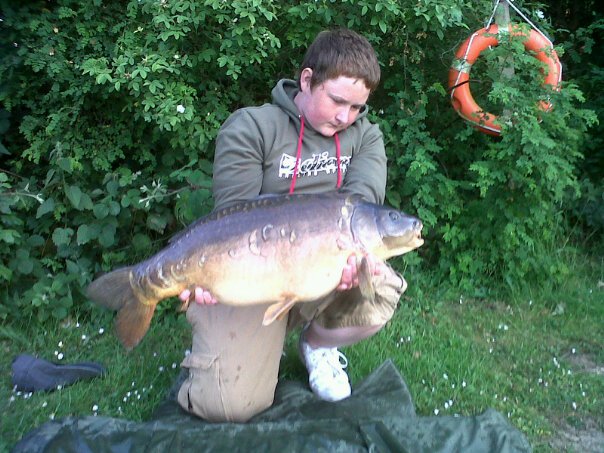 There was a lull in the fishing so I decided to change tactics and 14mm dynamite halibut pellets. I fished the damn wall which is the deepest part of the lake. This was an extremely short session of about 6 hours and in that time had 4 fish all were low to mid doubles. I only saw 2 other fish caught so was happy and proud of my decision to change bait.

The last session I fished was a Tuesday and as per usual scattered boilies in my swim. I cast two baits on either end of my spot to catch the fish patrolling my area. My dad had also done the same and had a 27lb mirror from his spot. I was extremely happy for him. My left rod then ripped off and after a hard thought battle was rewarded with a mirror of 22lb this was the best session for us both catching big fish.

Carp fishing was once a hobby, it’s now my obsession!

This entry was posted in Profiles and Angling Stories and tagged carp fishing, jake kelly. Bookmark the permalink.