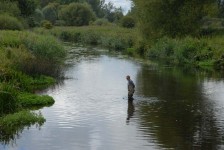 Let me say at once this is NOT a piece on ‘pro’river carping using pit methods on big rivers like the Trent, Thames or Severn. This piece – and many ­of my pieces in the future are more about how carping can be pursued in ways that only border on mainstream techniques. My feeling is that there are a huge number of general specialist anglers out there who enjoy carping but done their way. They, and I are not blind to boilies, bolt rigs, bivvies and the rest but there is not the time window in our lives for the long stay approach. This is Carp fishing on the hoof, with our daily gear and methods tucked into the available corners of our lives.

For people like us, Carp can figure quite largely in our annual fish results but they might not be thirties or forties and they might be caught in the ways we are more at home with. And, as a vital add-on, I know from members of the ‘high pro’ Kingfisher Syndicate, there ARE times when they want their carping to be a little bit different too, a little quicker, a little more hands-on. They’re not throwing their bivvies into the car boot sale, but what they want is a bit of fun. And you can’t beat river carping for ticking pretty well all these boxes. 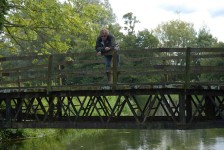 Most of my recent river carping has been on the Wensum and the Hampshire Avon but so many of our rivers have Carp in them courtesy of flood plain gravel pits and heavy winter rains. This is an opening for all us ‘Chub/Barbel/Carp angler hybrids’ out there! This is especially the case now we are in the mid to late autumn which is traditionally a great period on the rivers. But down, now, to the nitty-gritty.

The most basic advice is still the most important. You’ve just got to find your fish. Sorry to state the blindingly obvious but it’s true and you have to call into play the remnants of your Crabtree watercraft! Of course, Carp can withstand big flows, just like Barbel, but you are looking for them seriously in close, around slacks, bends and eddies. They generally prefer a hard bottom to feed over which will be close to the main flow but just on the fringes of it. The rivers are often clear enough still, even at this time of year, to physically see your fish and, of course, that’s the best signpost of them all. But even in muddy water, spend a lot of time watching, especially early and late. It’s not unusual to see a Carp roll, patches of distinctly Carp-manufactured bubbles, or even stains of water where they are feeding. Believe me, a couple of sessions put in simply to locate the fish can be a really valuable investment of time. Far better that then rush in and find you’ve devoted a huge amount of concentration on totally the wrong place. 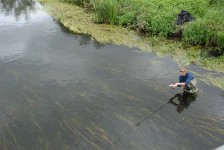 I’d always advise a river carper to choose a stretch of water close to his home or to his work. This is simply because then you can get a reasonable amount of bait going into a well-chosen swim on a fairly consistent basis. I think it’s important to understand that fish need a reason to visit any particular swim, especially river Carp which tend to be very nomadic. It’s just the same with Barbel: if there is no bait going into an area then, very frequently, the fish won’t visit. You don’t always have to get bait in on a daily basis. If you can bait up three to four times a week, whether you’re fishing or not, that is often enough. Just a regular trickle going in will register with the Carp and provoke them to drop off in your chosen swim whenever they pass. I’ve even done my baiting remotely in the past. I’ve hired the odd, promising local lad to put the bait in for me for a few quid a week. Of course, you’ve got to show him EXACTLY where it goes and EXACTLY how much to put in. And then you’ve got to trust him not to come and fish behind your back.

The next serious question is timing. As I’ve suggested, if you choose your river to be geographically sympathetic, you can get sessions in after work, depending on your lifestyle and this is perfect. As we all know, there’s no better time to be on the river than when dusk is falling and the first hour or two of true darkness sets in. If you can arrive any time between five and seven, say, and depart by nine at the latest, then you’re in business. At the weekends, again lifestyle permitting, you can even get up to do the dawn. I’m not saying mid-day sessions don’t work but this approach does fit in with busy lifestyles.

The sorts of methods you can use for river Carp close in like this are blindingly straightforward. This isn’t really bolt rig stuff at all. I’d suggest a couple of SSGs on the line if the water is slack enough or a small lead if it’s not. In coloured water, you can even use an open-ended feeder with bait pressed inside. Bite indication will commonly be a quiver tip but if the water is slack enough, a swinger / buzzer combination tends to be more relaxing. One of my personal favourites, as you’d expect, is to touch leger. The method is supremely effective for river Carp, as well as Barbel and Chub and, of course, in the darkness you don’t need isotopes and you can nod off if the day has been a stressful one.

Bait is an issue. I suppose on balance, nine times out of ten, I’d settle for pellets. I’d probably mix up a bucket with 4 – 6 ml pellets as a base with a good scattering of larger pellets in the 14 – 20 ml range. These I’d use on the hook. It’s tempting to put out mixes of seed, hemp and so on but, of course, in many rivers, small fish would simply whittle this away too quickly. Pellets, obviously also attract Chub and Barbel and they’re not at all exclusive but then no bait actually is. Whatever attracts Carp will also pull in Barbel but most of us would say that isn’t too bad an option either! 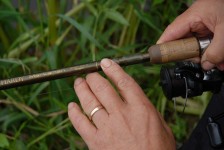 Your gear is up to you but remember that this really isn’t the type of fishing for three pound test curve rods that only bend the top six inches. Ninety-nine percent of my river carping is done with the Hardy Marksman range. I’ve yet to find much better than the Avons for fish well into the twenties. There will be eyebrows raised over this I know but no Marksman Avon has ever let me down yet. I’ll partner the rod with either a fixed spool or, most probably the Hardy Conquest Centerpin reel. This is a bit of an affectation, I know. It’s simply I love playing big fish in the dark on the pin, for all the drama of it. However, there’s no doubting the fact that you can play a big fish in confined spaces much more sensitively on the pin than on a fixed spool. It takes time and practice but if you try, you will soon be a convert, I promise. To finish, I generally use ten pound line or thereabouts straight through. The new Greys Prodigy Bait Anchors have been a real boon when it comes to re-baiting in the darkness. So easy, so quick and so efficient.

What are our targets here? I’d suggest that upper doubles are what we’re really about with a twenty pounder being seen as a real achievement. A twenty-five pound river Carp is a really serious capture and if you are lucky enough to nail one over thirty, then that is a true OMG moment. It hasn’t happened to me yet in this country but it’s high on my list of wants. Especially as so many river Carp, for one reason or another, tend to be commons rather than mirrors. As I’ve already hinted, anything, of course, can come your way. If that bite does turn out to be from a six pound Chub or a twelve pound Barbel, I’d plead with you not to disrespect that capture. These are very worthy fish in their own right. 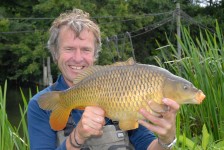 On many Carp waters stealth is not too much of an issue if you’re casting a hundred and fifty yards. Remember, if you’re river carping, it could well be that your bait is often literally under the rod tip. This means that everything you do has to be at snail’s pace with no vibrations transmitted through soft banks. You keep your body profile low, keep your shadow off the water and pop your bait in with barely a murmur. This might be carping far more up close and personal than you’re used to.

Again, as I’ve suggested, keep rigs as basic as possible. One of my favourites, for example, is simply a hook on the end and three SSGs clipped on the line at six inch intervals. In the event of a snag up, a rig like this takes approximately forty-five seconds to replace! Don’t worry about missing bites, when they do come, they’ll be amazingly positive.

And do keep warm. I go out with a full Hardy EWS outfit. Breathable chestwaders, good outer shell and lots of warm layers underneath. It’s not ever a bad idea to slip on a lifejacket as well, especially if the banks are slippery. These inflate automatically on contact with water so they’re not bulky in the least.

Enjoy what might be a new carping departure for you. I’m not saying it will take you away from your beloved pits throughout the summer but river carping could prove to be a real God send in the autumn and winter when life gets hard on the big, open stillwaters.