It Pays to be Different 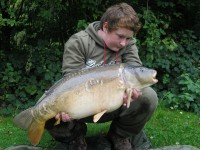 Just after I wrote my first article for The Session, For A Limited Time Only I had a really good session where I caught a new PB at 22lb 12oz.

The session was on a Wednesday, which is unusual for me as I am normally at school during the week so can only really fish Saturdays and Sunday. My Dad and I pulled in through the entrance of the venue to find we were the first people to arrive. This is always a positive as it means that we get the first choice of swim. We chose to set up half way along the car park bank in a swim I am extremely familiar with and have had some of my best fish from. Just as we arrived in the swim two more cars turned up, but luckily for us they went to another part of the lake known as the dam wall.

The conditions were poor for fishing; extremely hot and not a cloud in the sky which indicated high pressure. This often means that the fish just laze about just under the surface and aren’t willing to feed. 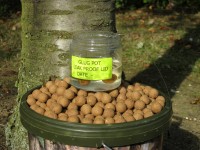 I started the day as always by putting around 60 Scopex Squid Liver Plus boilies on a gravel bar around 40 yards out. I work on a principle of around 30 kilos of bait per rod per fish scattered in a 20 yard radius. I feel this works well because it gets the fish searching the area for bait with the hope of it picking up my hook bait.

The fishing was slow to start off with and nothing was caught until 1pm which was unusual for this lake as normally fish are caught between 6am and 1pm. I started off the day very confident as I had seen fish topping in the particular swim I had chosen. The first fish came at about 1.30pm in the shape of a mid double common. It put up such a scrap I was convinced it was a twenty but I wasn’t disheartened when I weighed it and it came in as less. After this fish I scattered 30 baits in the area before casting out. I always think it’s better that the fish move out the area when the bait goes in, as it means they aren’t going to be scared off by my lead and rig. 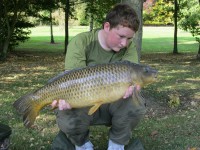 The fishing really picked up for me after the first Carp was in the bag – a 17lb mirror and just under 19lb common in quick succession. The common fought like nothing else I had caught before and, as I got it into the net it I instantly knew why, it was extremely long and had a big strong tail.

There was a lull in the fishing but I carried on using the old faithful Scopex Squid Liver Plus. I was sitting tying a rig when my matrix bobbin lifted up and dropped back, suddenly the spool started spinning and I was in. The Chub Outkast rod I was using played the fish well as she kept kiting into the marginal snags to the left of my swim. I managed to bring the fish out in front of me and in one fluid motion she was in the net. As always I checked the fins were flat against the body before lifting the fish out and putting her on the mat to unhook and check for wounds, lesions etc. The fish had a lesion just above the left pelvic fin which was treated with Kryston Klinik to help it heal and stop it getting infected. I had a good look at it and noticed it looked like it had two bellies – a very unusual body shape, I had never seen a fish like it. I put the fish in the sling and lifted it up onto the scales; the needle went round to 22lb 12oz and I was over the moon. I lifted her up for photos, shook my dad’s hand and put some bait out. 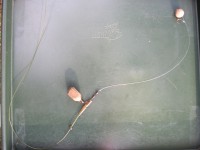 The fluoro rig was the rig I had had all my fish on so I decided to change the other rod onto it and within 20 minutes my tip bent round and my alarm sounded.I ran over and leant into it as the fish felt about average. I lifted the mid double common out and I was right. My dad put the fish back while I put some bait out. There were no more bites.

My dad also had a good session with 4 fish up to 17lb, we were the only people to catch more than one, and many others blanked.

I packed up feeling confident for the next session in the knowledge that I have found a method that consistently works for me.

This entry was posted in Profiles and Angling Stories, Uncategorized and tagged carp fishing, guest writer, jake kelly, the session. Bookmark the permalink.