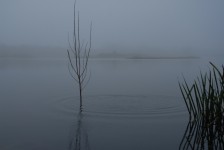 Rather like my last piece on river fishing, this is for the general angler wanting some winter Carp sport and, hopefully, for the ‘pro’ who wants to liven up his Carp once the temperatures plummet. I’m seeing this more and more often at the Kingfisher Lakes where our mega stars are moving from the main water to the smaller ones just simply to catch some fish, test out some baits or brush up on techniques. And, what’s interesting is that when they cross over from the large water to the small ones, they frequently change approaches. Winter is definitely the time to expand your repertoire, to play around with new ideas and to catch some fish and have some fun.

The sort of waters I’m talking about now will either be shallower pits or even estate lakes. We’re probably looking at waters between one and ten acres with a maximum depth of perhaps eight feet. These waters will be reasonably well stocked and I can think of at least fifty-odd venues like this that I’ve enjoyed in my Carp fishing life. Yep, now is the time to get off the seriously big pits with low stock densities and keep the Carp coming.

Winter carping on these smaller waters is all about weather and location. Let’s look at common scenarios. Say the day is still and warm, perhaps with freckles of drizzle from time to time. Time to look for every sign of Carp. Look as though your life depends on it. Two or three bubbles might well give the game away. A puff of silt. A few leaves or twigs coming to the surface. The very slightest oil slick flattening out a ripple. All these are signs that you can’t ignore. They all indicate that there is at least one Carp stirring, taking in food, proving itself to be catchable.

Let’s take another scenario. Now there’s high pressure and the day is very bright with the sun in a clear, blue sky. This is an advantage because if the water is clear it does allow you actually to see the carp themselves. If you can spot them in crystal water, location is clearly all the easier. Sometimes, you will even see them feeding under thin ice. Look especially for Carp under overhanging alders, hanging around dead lily beds or very close to died-back reeded margins. You will see them moving very, very slowly but providing there is any movement, they’re not comatose and they’re probably feeding. 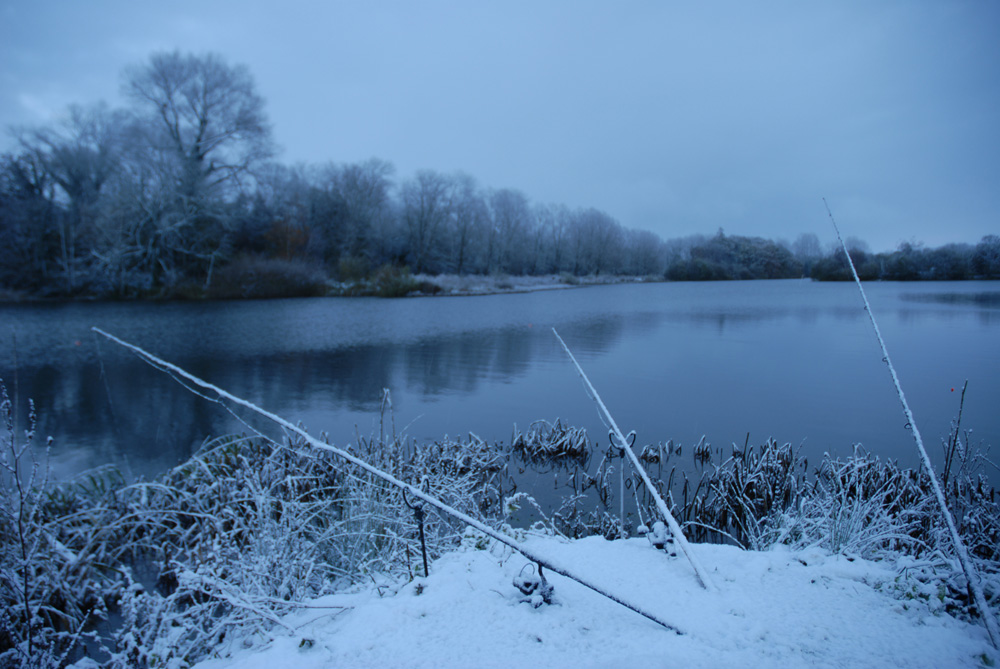 I’m stressing location because, even in small waters, it’s central. You will often find groups of Carp very close packed with vast areas of water completely barren. A pitch might look good from the surface but it might well not hold fish at all. We all know about location on big waters but it’s just as an essential element on small ones, too.

Estate lakes are very frequently spring-fed, and if you can pinpoint where springs actually bubble up you’re really onto something hot. Literally. In winter, it’s often the case that spring water entering the lake warms an area around and attracts fish in. Sometimes you will be able to pinpoint springs by gaps in the ice, kept clear by this inflow of warmer water. Other times, you will notice that the bottom is conspicuously cleaner around a spring hole. If you fish anywhere within two to five yards of the spring, then you put yourself in a strong position.

Of course, you can fish long-stay on waters like this in the winter but in my view, it’s not what these lakes were designed for. I advise visitors to Kingfishers, as well as the syndicate members, to fish short and hard. In my experience of waters like this in the winter, they fish best between 11.00 a.m. and 5.00 p.m. In my view it’s best to fish with real effort for six hours than simply jog for twenty-four. And if you’re even more restricted time wise, I would say the best period of all is between 2.00 and 4.30 p.m. once the clocks have gone back and the nights pull in. This is when these lakes are at their warmest and when the carp are at their most active.

I know a lot of serious Carp anglers can’t contemplate fishing even like this in the winter without their boilies. So be it. I’m not here to change the habit of a lifetime but what I’ve always found successful, silver fish permitting, are smaller baits introduced in limited quantities, unless I have concrete evidence that the carp are feeding hard. Over the years, when the temperatures have plummeted, I’ve found mixes of hemp, casters, red corn, dead maggots and six or eight ml. pellets have proved really deadly. If you put out half to a pint of bait, you will find it’s enough to keep three or four very big fish browsing for anything up to two or three hours.

One of the most exciting approaches that I’ve personally witnessed was several years ago when I was writing what proved to be an abortive book with carping star Martin Locke. We were on a difficult water down in Hampshire of exactly the acreage and depth that I’m talking about. Martin’s approach was to fish very tight, very close in with a couple of pints of bloodworm mixed into a hemp-based ground bait. Over the top of this bloodworm mix, he fished a small red worm under a wind-beater float. He didn’t get the very big fish he was after but he caught plenty of smaller ones. In fact, the bloodworm attack absolutely blew his swim apart and for two days he had more Carp activity in front of him than was seen anywhere else on the lake. 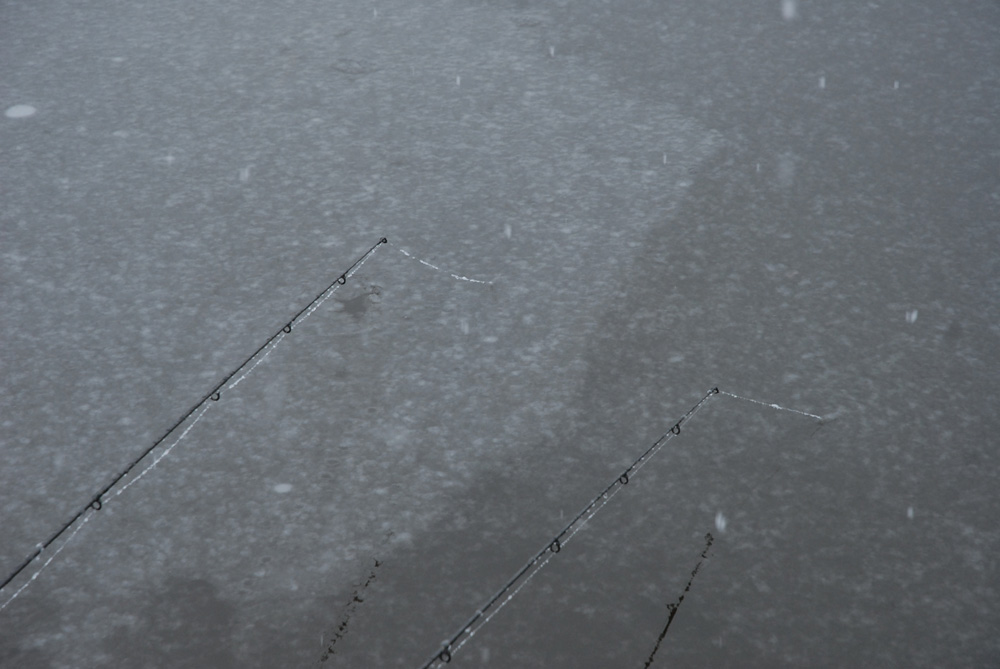 A fish is still possible

If you are fishing light, tight and close in without boilies, it’s not always the case that standard, self-hooking rigs work the best. Like Martin Locke, I’ve often found that a float really does the business, providing it’s fished over depth and you’ve got a lot of line lying on the bottom. I often like to fish on the bed, though, with a butt indicator. I’ll often simply use a hook with two, three or four AAAs up the line, possibly spaced out with gaps of twelve to eighteen inches between them. I’ll keep a slack line and watch it very closely for any lifts or vibrations. Sometimes a butt indicator will rise but very often takes are so slight just a half inch twitch is enough to strike on. There are cases in shallower, very clear water when you can actually watch the fish over your bed of bait and sometimes even see a hook bait picked up. If the fish are decent, life doesn’t get much more exciting than this and a winter session can pass in the blink of an eye.

Other tips are obvious. Keep warm so you maintain your concentration. Move very carefully so the fish don’t see you or, more importantly, feel your footfall. Polaroid glasses are essential and if you can, keep scatterings of bait going into an area over three or four days and get the fish really looking for it hard.

Over the years, I would say the majority of my most beautiful Carp have come from waters like this, in the winter on the methods I’ve described. Winter does a lot to the looks of a fish. Body-wise, they’re at their firmest and most muscular. It’s their colouring though that astounds as it deepens into incredible shades. I well remember one December leather of twenty-five pounds that was absolutely the colour of a conker. It was caught at 4.00 p.m. under the rod tip on three casters on a size 12. The line lifted two inches, the water rocked to the strike and ten minutes later I was putting my net under a fish that simply took my breath away. Sadly, I can’t find the transparency after all this time but if there are any students of angling literature out there, find a copy of In Wild Waters (1989) and you will see a picture of the fish on page 59! There’s a bit of homework for you so don’t say that you don’t get it all with The Session!