The last time I wrote for The Session we were in the middle of summer and the article was written on the bank sitting under my bivvy taking shelter from the midday sun. At that time I wrote about the trip I was actually doing – a bit of floater fishing, which now feels a million miles away from the cold dark nights of present.

So just to be topical, I will go through a few winter hints, tips and observations. I do not class myself as a winter expert by any means, however I have fished through all four seasons for the past twenty five years and have tried a variety of tactics along the way. I have spent many hours sitting in the darkness of the bivvy through freezing conditions, to find after many years that I was just going through the motions, forgetting the absolute basic fundamentals of why I actually go Carp fishing which is to enjoy myself. I have always stated Carp fishing is not an endurance test; it is a hobby to be enjoyed, so the day I’m not enjoying it, then that’s the time to give up. I have seen written so many times that the angler should target a water with a large stock of fish to give himself a far better chance of a run, and to get a bend in your rod. Now for me that is fine if I am doing short day only sessions, you only need half the gear, you can keep mobile, up sticks and move the minute you see any Carp movement, great advice? Although the thought of getting out of my nice warm sleeping bag in the middle of the night in freezing cold, wet conditions for a relatively small Carp just isn’t no fun. I tend to fish the same waters as I have targeted all year in the knowledge that if I am fortunate enough to get a fish it will be worth getting up for.

Location is still the most important part of fishing, full stop. It does not matter if it spring, summer, autumn or winter it is vital that you locate your prey. The first thing to notice is the water clarity, as all the suspended matter that clouds the water in summer tends to settle. Use any vantage point to observe the water, climb trees etc. Shallow water often gets overlooked, but as the sun penetrates the shallow water quicker, you can often find the Carp in relatively shallow water.

When you cannot see any fish then I would start with features such as old weed beds, snags etc. Do a bit of homework on the water; find out where in previous years, the Carp have been caught. Carp are undoubtedly creatures of habit, so this year’s winter hotspot will most probably be found in the same area of the lake as seasons past. With the water being so clear, the visibility of you rigs becomes paramount. I use mono hook links an awful lot throughout the year, and for winter fishing can think of no better hook link usually in the 8 -10lb bracket, teamed with a size 10 or 12 hook. Think about the leader you use, drop your rig in the edge and see how much it stands out. I have not used lead core for many years for exactly that reason, a heavy thick fluorocarbon leader seems to be most people’s choice. For me I just use my mainline straight through to a running lead. 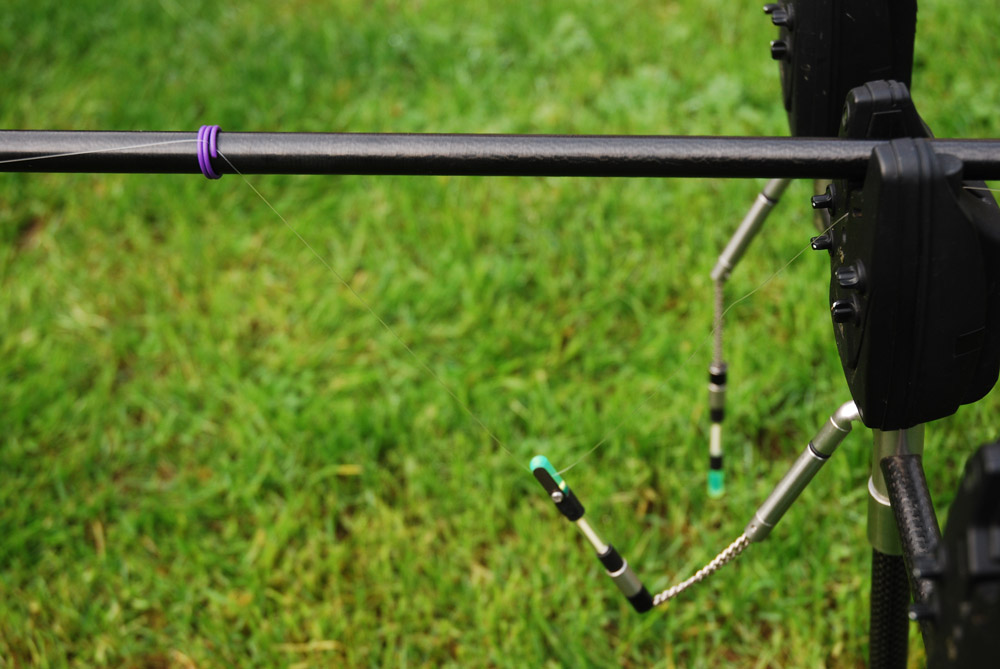 Think about your line lay across the topography of the bottom, find out what is between your rod tips and your baited area. The current interest for fishing ultra slack lines, with light bobbins resting on the floor in all situations baffles me, when was the last time these anglers experienced a drop back, a liner or knock on the rod tip? All of these are great indications that you have fish in the area. I’ll give you an example… a lad on our lake had found a clear gulley up against an island just behind a weed bed. He proceeded to cast to his marker, baited up, then slackened his line off, allowing the fluorocarbon line to sink. He then attached his bobbins on the slack line and lay the bobbins on the floor. When questioned, his explanation was to hide his line so not to spook the fish. We are fortunate enough to be allowed the use of a boat on this water, so I suggested we row over to the baited area to observe his presentation. The lad couldn’t believe his eyes as we approached the spot. The line came up directly from the lead at 45 degrees to the top of the weed bed. Then again 45 degrees down the other side it stood out like a tow rope.  I then explained that if a fish picked up the bait, its only options were to move either left or right along the gulley but would more probably move towards him into the weed. All three actions would not have registered a bite on his bobbins until a lot of line had been moved. This he tried with the oar of the boat – the lead being moved nearly a full metre before we heard a bleep on his alarm. We tried this again with my suggestion and a slightly heavier running lead set up in place of his fixed lead, then tighten the line to the lead, this pulled the line down into the weed, disguising it, then slide on a small back lead, allowing the weight of this to hold the line low in the water. He then attached his light weight bobbin, this time off the floor and held in place under a line clip approx 300mm behind the buzzer, the bobbin holding the line in a nice acute angle to give maximum visual movement. We then tried the same test again, this time he could only move the bait about 150mm in any direction, before the alarm sounded. 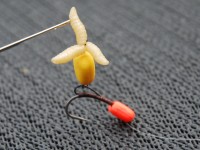 Bait is largely dependent on venue. During the latter months I tend to make a few subtle changes to the make up of my bait and reducing the fat content is one of them. I like to keep using the same base mix and attractor package all year, for this reason I do not use oil based attractors in the baits original make up as these I feel, have a detrimental effect in the colder months. I do not wish to try to establish a new bait just for the winter, I just keep the bait going in, in smaller quantities than the summer. Also trimming my hook bait down and chopping and crumbing the freebies has the effect of releasing the attractors into the water quicker.

On too many occasions I have seen anglers revert to a single hook bait approach the second we have our first frosts. If we don’t keep them actively searching for food, then the Carp’s instinct kicks in, they will not use up valuable energy searching out a food source that does not recoup nutrition lost. As I have said, keep the bait trickling in regularly and your chances of catching the carp will go on later into the season.

A different approach is used for when I fish days only as these lakes are normally under more pressure and fished far more regularly. I have not had the benefit of establishing a food bait throughout the year. My day only lakes are more local to my home (the other syndicate lakes that I fish throughout the year are unfortunately a long drive away between two and three hours each way, and with the shorter winter days, does not make a day trip viable.) I use chopped and crumbed baits but also maggots and sweetcorn – there can’t be a Carp alive that doesn’t like sweetcorn! Even when your lake has been hammered on corn or maggots, you can revitalise them as sweetcorn takes on colours easily and both can benefit from a light coating of flavour, try three or four tins of corn all dyed a different colour, if you want to create a visual feeding area.

I am not a great lover of PVA nowadays as it seems every man and his dog has used this approach for years. I’m convinced that even when dissolved the Carp can sense the chemical breakdown. I prefer to use my long range bait dropper, similar principle to the now popular spomb. However, mine then sinks and opens on the lake bed, giving a far tighter radius of bait. Alternatively I have gone back to the pre pva days, a method we used to call ice pops, easy really, any food item and or liquid that you choose can be mixed together, poured into ice molds, small plastic cups, plastic egg boxes, anything. Before you freeze them lay a loop of line into the mix. I always put a small piece of stick through the loop, inside the mix, to prevent the loop pulling free on the cast. When frozen, you can transport them to the lake in a wide mouth vacuum flask, on the bank slip the frozen ice pop on to the lead clip with the loop.

I have tried, putting the lead into the mixture, instead of a loop of line before freezing, either method works. Cast out and you will have a slow release of attractors around your hookbait without the need for pva.

The last tip of the day is be prepared for the cold, keep wrapped up warm and dry, in the winter if you do get cold and wet, then you stay cold and wet, use a layering system of clothing such as Chub Vantage, breathable base layer, thermal mid layer, then a wind and waterproof jacket. Petrol stoves tend to work better in winter than the gas bottles, eat hot food regularly and wash it all down with a hot brew.

And remember you always have a chance as long as you have a line in the water.