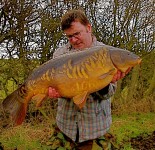 Historically anglers have always viewed February as the hardest month to catch Carp. It goes without saying that the long nights have kicked in, the constant low temperatures and inevitable though it is, usually lakes that have frozen up at some point. I always pay a lot of attention to the last of those points. When a lake has frozen the water has gradually been reducing in overall temperature throughout the autumn and early winter trying to not freeze. Soon as it has frozen, the damage has been done. Thereafter the ability for the lake to freeze, with just a daily drop in temperatures, is greatly increased.

Having painted such a gloomy picture, why have I labelled this months Session instalment as Favourite February? Simple. Anything that I catch this month is a bonus and far more greatly appreciated than when the bobbins are dancing away in spring and early summer. I will return back to that point in a minute, as I want to give you a few vital winter pointers about increasing your chance of catching.

The good news, no actually the great news, is the tackle available to all of us for winter fishing is far superior than ever before. You will remember last year at this time I was singing the praises of the new Chub Cloud 9 Sleeping Bag. Surely though the plethora of sleeping bags available today don’t make that statement of great interest. Well actually, you’d be wrong. The one thing that those of you who read my inane ramblings always tell me, is I say it as I see it. I don’t understand why anyone would want to be any different but it seems they are. In a competitive ‘elbows-to-the-front’ manner, many a Carp writer has extolled the virtues of their current sponsor only to end up extolling the virtues of their new sponsor weeks later! That’s not for me. If something is crap I will say so. Indeed none of you ever heard me saying how great the range of Chub Sleeping Bags were until the Cloud 9 range came along did you. Why? Simple, I didn’t like them and their zips bust too easily. However when the new Cloud 9 came along the product development guys had done their job and a great piece of kit was keeping me warm, not draining my wallet and helping me to fish more effectively. Happy days. Throw in the bivvies, stoves, bedchairs and whole host of other paraphernalia that we carp anglers use and fishing through the winter is now possible for all… not just the insane.

A couple of rod nods five minutes apart signalled this 40lb 4oz Carp was on.

I would like to briefly bring up the subject of bait and its application during February. I would simple say, fish for bites through careful application and look to establish a food source that the Carp look for ONLY when the temperatures permit. That isn’t February! I see so many Carp anglers these days wasting valuable money by putting far too many boilies in. In complete contradiction to what most Carp anglers write about, I would look to concentrate all my efforts on the three most important aspects of February fishing. Location, location and location. Now I know that comment won’t go down well with some of my compatriots who have bait deals but I am trying to get you a bite here… not sell you some bait! Do not get me wrong, established food bait is by far the best way to ensure continued catching success. However don’t try to do it in February, as 99 times out of a 100 it will fail. Instead look for locating the Carp and making sure you know when you get a bite. Now before you all cart me off to the lunatic asylum let me make this statement. You are fishing for bites in February not runs!

Often this time of year all you will get are rod knocks or line tightening. Indeed it is during February that I always make sure I am fishing a tight line. In fact I have lost count of the number of times the bites during February have simply been one or two bleeps or even just the rod nodding. My advice is with these entire occurrences pick the rod up and strike. Remember how to do that? I know it is a new conception in Carp fishing but believe me it works LOL. I can clearly remember catching a beautiful February-caught Carp of just over 40lb a couple of years ago, that literally just tightened the line. I left it and then five minutes later the same thing happened. This time I picked the rod up and after a torrid struggle netted a beautiful deep Italian style Mirror just over 40lb. Now I quickly realised that the two-rod knocks were the same bite. I believe the Carp had been hooked but decided not to move off. The second rod knock that saw me pick the rod up was the same Carp doing the same thing he had five minutes earlier, when I sat motionless. As a result of this that particular winter I went on to catch some lovely winter Carp and they were big ones too.

The added attraction of February fishing is the Carp are in great condition. The winter colours are prominent and the Carp are near their top weights. How good does it get…not much better? Yeah for sure as I said they are harder to catch and you have to be more alert but the sense of achievement you will get when you catch them is far greater than normal. If it isn’t drop me a line and I will see if I can help to convince you further. Remember a fish is a wild animal that will feed at sometime during the day. It may be for a few minutes rather than hours but they will feed. Always believe in your tackle, bait and more importantly your tactics and I am sure you will be successful.

Good luck and see you on the bank

This entry was posted in Uncategorized and tagged carp fishing, mark holmes. Bookmark the permalink.