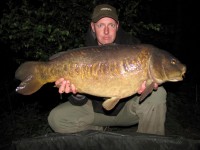 This is the first time I have written for The Session since my appointment as Chub & Greys Carp Academy Manager a few weeks ago. I was really pleased to be offered the position and so far it has gone very well but, it is a big learning curve because I don’t have a great deal of experience in marketing, however I do know a fair bit about Carp fishing and that is essentially what it’s all about.

The job is a part time role so unfortunately I still have to work else where to make ends meet. Well, that’s if I manage to find another job! I was laid off a few weeks ago on February 4th, for the second year in succession! Why can’t I get laid off in April so I can enjoy a spring campaign and not have time to play with when it’s cold and bites are hard to come by? However, I’m sure I will find work soon and with a bit of time management I can balance out both roles and get some fishing done to make life an enjoyable challenge. 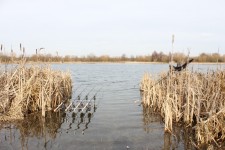 As you read this it’s early March which means spring is just round the corner and we will soon be enjoying the easier fishing as the Carp start to look for food after their winter inactivity. Or will it happen that way this year? The last three winters have been very cold, with regular frosts and record low temperatures (around -20C in places if my memory serves me correct!) But this year on the whole has been very mild. I can only remember one freeze up of about 10 days at the start of last month (just as I found myself with plenty of free time. But the rest of the time has barely seen a ground frost, it fact every month this winter has seen at least a night or two where the temperature hasn’t dropped below double figures.

As I write this in my bivvy the forecast for the end of the week is up to 16C in February! However, despite the milder weather it seems that our lakes haven’t fished very well at all. I’m willing to wager that on rod hours per fish banked and this winter is probably similar to previous years. The problem we are going to be faced with this year is that the mild weather hasn’t killed off the weed like it normally does and in some cases it is still growing. 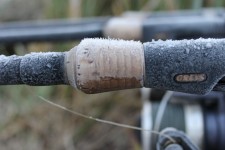 The weed in the lake out in front of me now is still 5-6 feet high and green, so if the weed hasn’t died then I’m doubtful that all the natural food has gone either. This could create a few issues in April / May. Firstly, will the fish want our bait if there are so many naturals around? And secondly, is our approach to spring going to have to change? My usual spring tactics are to use Zigs and Chod Rigs and stay mobile to keep on the showing fish and use my bait for mainly pre-baiting to give the fish a taste for it. But, with the weed still present at the height it is at, are Zigs going to be effective for getting a bite? And, if so, is it safe and fair on the fish to use them with so much weed about that could create an issue with losing hooked fish. Maybe I might have to attack this spring like a summer campaign where I find gaps in the weed and bait up in the hope that the fish come to me?  It has certainly given me something to consider and I’ll have to play the situation by ear when it comes about.

On the brighter side of the mild winter it hopefully won’t incur the amount of fish deaths that were attributed to the previous harsh winters. I know of a few fish that perished last year as the ice sealed a couple of shallow pools causing the oxygen levels to drop to fatal amounts. Also, a few of the spring deaths were blamed on the cold weather taking their toll. Some of the country’s biggest, high profile fish suffered as a result, I just hope this milder weather has helped some of our remaining old warriors survive a bit longer so us anglers get a chance to add them to our photo albums. 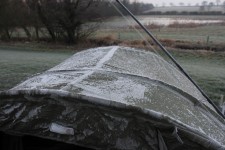 The Joys Of Winter Carping

I’d just like to finish off this piece by appealing for guest writers for The Session. If any of you guys reading this have any good stories to tell or any successful tactics to pass on then why not get them down on your computer and send them off to our editor, Lucy to be in with a chance of being featured in The Session. I have found most people have a story to tell and it’s good to read something a little different from the norm. I have approached a few people I know that have stayed below the radar and never put their experiences into print and it has surprised me how good some of the material is, and also how a different view on a common topic can get me thinking. So, if you fancy sharing something then please get in touch on our Facebook pages, or via email you never know it could be the first step to becoming a regular writer in the monthly magazine.

I hope you all have a successful spring and bank a target fish or two,