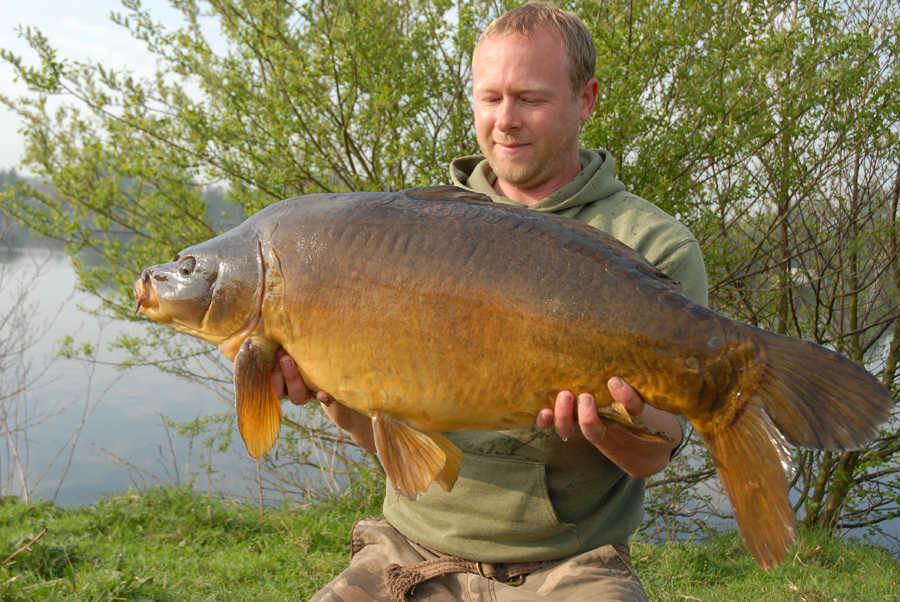 I’ll make no bones about the fact that I’m not at the pro level of carping these days. Back in the 1970’s and ‘80s, maybe but now time has caught up with me and my carping is all about shorter, sharper sessions and making the time work for me. That doesn’t mean to say, though, I don’t have my finger on the pulse. I like to write what I know about and, fortunately, running the Kingfisher Fishing Club syndicate ensures I’m on the water when it counts.

Tenching is my thing. I’m on Kingy after the tinkas from early March right through until late April and into May. This is prime tench time and it’s when the vast majority of the lake’s carp get caught, too. It’s an exciting time to be on the water. I’m doing my own thing but I’m really close to the carp boys, watching what they’re doing, photographing what they catch and celebrating with their triumphs. It’s great stuff. It keeps me in the carp loop. I can get my carping kicks, if you like, at secondhand! But these are my key observations built up over four years of pretty constant springtime fishing.

I guess it’s the light that’s all important. Now we’re getting twelve or more daylight hours and it’s this that is really making the carp stir. I think this is more important than temperature, wind, pressure or anything else. Carp respond to light. The insects they feed on respond to light. It’s the lengthening of the days that really makes this the most explosive time in the carp fishing season. 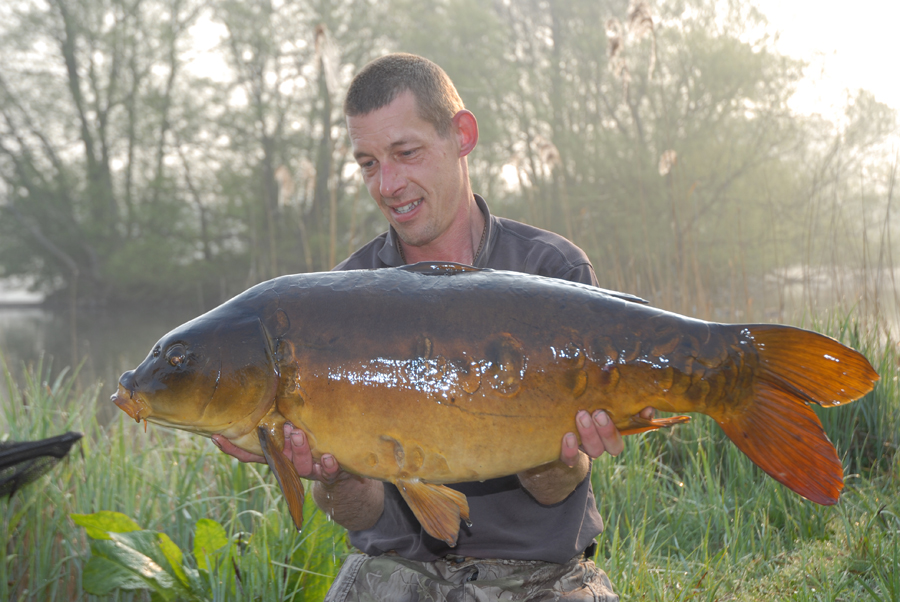 Of course, all the other weather factors, too, are important. That’s obvious but, the fact remains, I’ve seen carp come out when air temperatures have been two or three degrees and the wind has been hammering in from the north, particularly cruel when you think the North Sea is only a few miles away. I’ve photographed carp in the sleet, even the snow and they keep coming out. Naturally, milder, warmer, more settled periods see the most fish but never write off any weather conditions at this crucial time of the year.

I guess the vast majority of carp I see caught come from the shallows or close to them. There’s sense in this. This is where the first of the weed is growing and where the last of the weed is still hanging on. And weed means cover and cover means insect life. These shallows, too, really benefit early doors from the growth in daylight hours and from the warmth of the sun. The deeps can be cold, uninviting and barren of food. Get on those shelves, those plateaux, those shallows and you’re looking at food-rich water where the carp are more likely to browse. 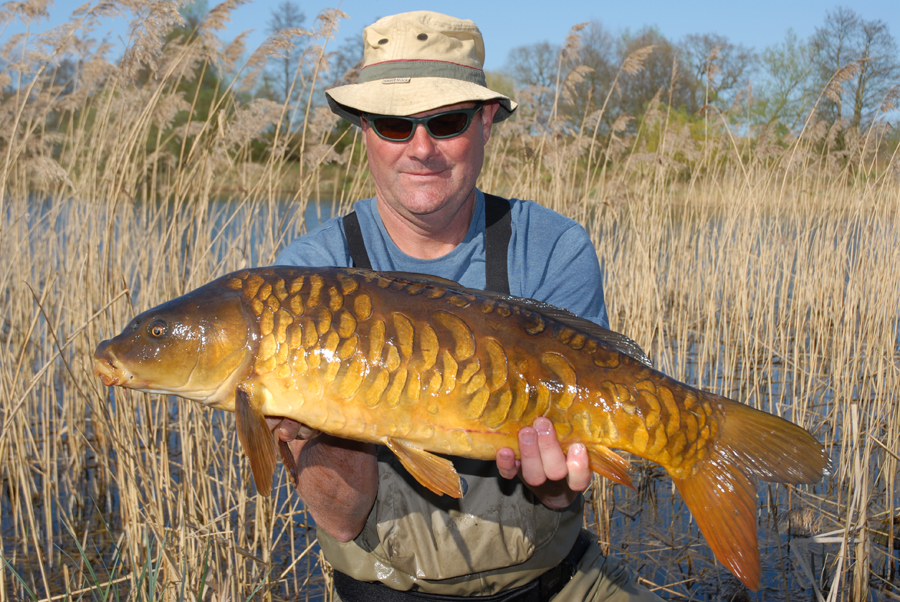 I think this emphasis on daylight and the new life it brings to the water explains why so many big fish get caught in the morning especially at this time of the year. Of course, carp come out at night but I would guess that eighty percent of the fish I photograph fall any time between seven and eleven a.m. As far as I’m concerned, these are crucial hours that you just can’t afford to miss. Sometimes you have to, I know. If work calls, you’ve got to pull off the water at six or seven a.m. and that can’t be helped. If you can hang on, though, always do so.

The really successful guys that I witness are always quick to move. They’ll spend a lot of time deliberating before they set up their pitch but even when fishing, they will always be watching the water through binoculars. In large part they’re looking for carp moving and this often means there is a fly hatch on somewhere on the lake. If one of these anglers sees this happen, then his kit is on the barrow and he’s off there fast. There are times, obviously, when you can’t do this because of someone fishing the swim but if there’s bankside vacant and you see activity, don’t wait for it to come to you.

I guess most of the really successful guys tend to feed more likely at first when the spring weather is still cold. You can put bait in but you can’t take it out and it pays to feel your way, sensing how the session is developing. Of course, if the carp are feeding big time then you go with them, you’re dictated by what they want. The weather doesn’t have to warm up much before they really do decide to get their heads down big time. It’s not unusual to see a dozen big carp come out of Kingy on a really good day and that can often mean that you’ve got to bait heavily. 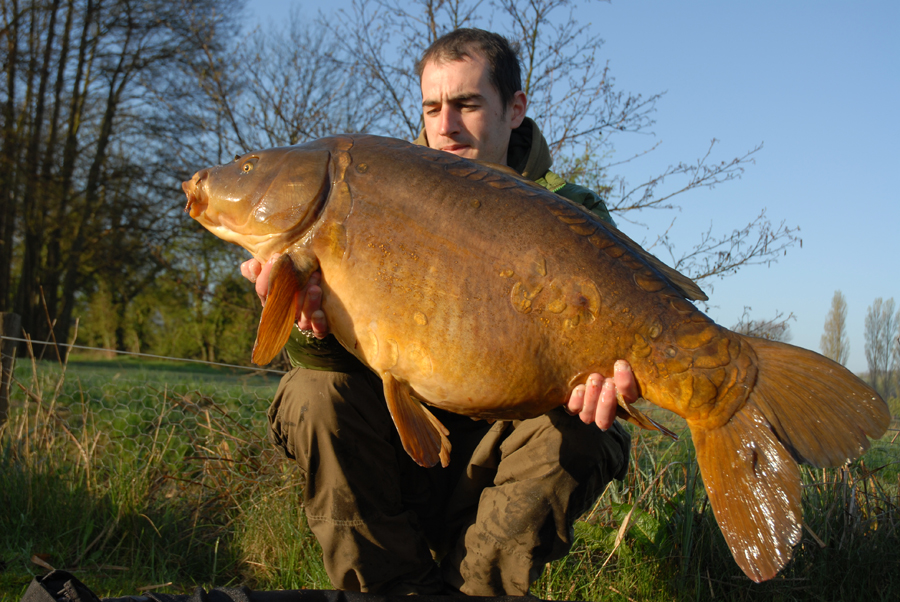 These are fabulous fish, these spring crackers. They’re still sporting those really deep, vivid colours that they assume in the winter months. They’re probably at their best, I would say now. Catch them in the bright, springtime sun and those mahoganies and browns really glow. They’re like big horse-chestnuts with fins these fish!

As a tench angler, I’m beginning to take my pike hat off and put it away for the start of next winter. But tench are on my mind and I’m thinking about gear, changing line, pondering rigs and if I were a carp fisherman, I’d be doing exactly the same thing. The whistle will soon be blowing. The game is back on. These are the best carping days of your season.

This entry was posted in Techniques and Methods and tagged carp fishing, John Bailey, spring carp fishing. Bookmark the permalink.