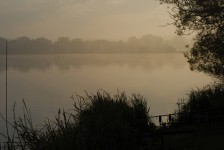 I guess Kingfisher is like scores of premier, large fish syndicate waters. So, what I’m saying in this piece is going to be applicable to the venues a lot of you fish yourselves. I’d like you to come back on me about this piece if there’s anything you think you can add to it. I’ve always regarded these website features as a two-way street and I’d really like to pick up opinions from around the country on what I say. It’s not easy running a syndicate with sixty or so highly professional Carp anglers, all of whom have different ideas. Sometimes, it’s possible to get too insular, too blinkered, too involved with your own water and your own club membership. It’s good, therefore, to have a wider view and broader focus. But here, anyway, are some of the issues…

There isn’t any big Carp angler that likes to be woken up at two in the morning, only to reel in a small stocked fish. I totally understand that. The problem is, what do you do about stocking a big lake like Kingfisher in the twenty-acre plus region? You don’t really want to spend thousands on twenties, thirties and forties and not just because of the expense. You don’t really know what their history is and what problems they could be bringing with them. You hope, of course, you have enough grow-ons produced by your own fish but you can’t always guarantee that. Obviously, with big fish like these there will be some natural wastage through old age and even the excesses of spawning. Throw in the possibility of an Otter attack and you can see that big fish populations don’t remain stable for year upon year. My own feeling is to dribble good, accredited fish in during the course of each season. For example, I’d like to put in a dozen or so mirrors in the fourteen to eighteen pound category to keep stocks topped up. We stocked with seventy or eighty commons some years ago and probably forty or fifty of those have survived. They’re still referred to rather scathingly as the ‘stockies’ but now, of course, they’re reaching the mid-twenties and becoming very desirable fish.

What better way to photograph a fine Carp – if you can stand the cold.

When I took over at Kingy, there were so many rules it was almost like sitting an A-level exam. I personally like to keep rules to an absolute minimum. As I see it, the fifty or sixty guys we’ve got here love the fishery, love their fish and, therefore, will be doing everything within their power to look after the fishery’s future. It’s totally self-defeating to do things that injure the fishery. You’d simply be shooting yourself in the foot. Because all the boys are so experienced and because there is such a good dialogue between them, I feel rules could and should be kept to a minimum.

I think there is one thing most of us seem do agree on and that’s keeping bait boats off the water. There’s something about them that detracts from any fishery when they are allowed, in my view. I’m also worried about the possibility of putting baits too close to snags and without proper control over any potentially hooked fish. And there is also the question of disputed target areas, especially at range.

I’m also slightly concerned about very long stay anglers. I think there is a general feeling that after seventy-two hours or so, anglers should relocate to give everyone a chance. This is a problem of course, especially if you’ve put in a lot of bait. Virtually all the Kingy anglers have to balance work, families and their fishing so this means that nearly all of them can only afford to spend twenty-four or forty-eight hours on the water and that’s generally at weekends or when they get time off during the week. I guess it is a problem if you have members of a syndicate that fish virtually full time. It’s hard on the vast majority trying to fit fishing into tight life schedules. 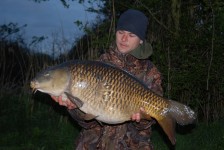 It’s my view that the Kingy members are experienced enough not to use suspect baits and not to need lessons on fish care. Once again, as I’ve said earlier, not to look after their Carp or to jeopardize their Carp would be a quite ridiculous thing to do. I would like to think that none of the boys would take shortcuts that are potentially damaging and that there is enough awareness so the water is pretty well self-policing.

This really brings me to the general atmosphere around the place. I like to think that by being open and honest with the club members you’ll get that back. I really like it when a fish is hooked and all the club members gather around to help with the weighing and photographing ceremony and generally offer congratulations. There is a good feeling at these sort of moments. Of course, everyone likes to be the guy with the rod bent but I think most serious carpers know this can’t happen all the time and that what goes around tends to come around. 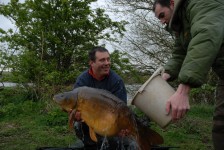 I do like to think that 2011/2012 was a good year for us at the Kingfisher Lakes but, of course, you can’t guarantee anything in life. This is why this piece is so important to me and I would like feedback if you think there should be some on any of the aspects I’ve mentioned. If you’ve got something to say, why not post your comments here.

In the meanwhile, have a great spring and enjoy your carping. These are the hot months, so make the most of them if you possibly can.

This entry was posted in Techniques and Methods, Venues and tagged carp fishing, John Bailey, kingfisher lakes, the session. Bookmark the permalink.