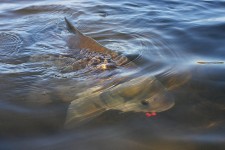 I heard of them for the first time, many years ago: Buffalo Carp! It is believed that they lived in the South of the USA and they are even heavier than our Carp in Germany.

Previously before the internet, I attempted to find a picture of a similar fish and finally found one which weighed 60lbs. The fish looked quite similar to the ones I had heard of in the USA and the rumours seemed to be true.

After a while I forgot about the whole story. Then, two years later as I saw another picture of a 60lb Carp and I became curious again. This time I tried to be more aware of the facts.  I wanted to try and catch my own Carp and thought I might be in with a good chance. No-one in the USA seems to be really interested in the Buffalo Carp. However, I heard of a guy who was keen to track them down. His name is Jason and I got in contact with him. Apparently he is really crazy about the Carp just like me.

Here was the man who could make my dream come true! Jason started fishing the Carp two years ago and, after that short amount of time became highly professional. He has caught numerous Carp weighing 40lb+ each; some has heavy as 50lbs and last but not least, a 70lb giant. Jason has to do a lot of work to get what he wants. He is well-directed and his determination brings him what he is aiming for.

The principle for fishing for Buffalos in the USA is basically no different from fishing for Carp in Europe. The rod is the same, the baits are similar and even the methods are not that different from each other. The only difference is the mystery surrounding the Buffalos compared to our Carp.

However, the plentiful Channel Catfish cause many problems. If you start putting baits out into the water the Catfish appear in huge quantities and they eat all they can find. We had to take out of the water around 30 Catfish in one night. With such a large number of Cats, we obviously couldn’t get any sleep. The problem usually disappears after 1-2 days when bigger schools of Common Carp make their way to the feed yard. Because of that, the Catfish mostly get crowded out. This is good for us because the presence of the Common Carp is unlikely. Even though the American Carp are tiny and rarely weigh more than 40lbs they are still very special.

Normally the Commons are very strong and flexible which makes them very powerful. I’m not exaggerating when I say the Carp I usually fish in Germany are extremely slow, compared to the American ones. However, you don’t go to America to see the Common Carp. Without a doubt you go to see the Buffalos! I can promise you that you will see many of the fish I mentioned earlier but I can’t guarantee that for the elusive Buffalos.

If the Buffalos find the food yard they will appear in huge schools and the chance to catch one becomes more realistic. Although, after numerous trips to Texas, and with all that I know, it is still hard to find the Buffalos. They are nomadic fish and swim throughout the massive American water reservoirs. They always seem to be everywhere and it makes it even harder for the fisher to look for behavior patterns. You can only rely on the fact that Jason is successfully fishing the Buffalos in winter between November and May. If the water temperature is less than 15 degrees, it is more likely to catch a Buffalo. The season ends with the end of the spawning time. Afterwards the fish disappear somewhere in the deep blue sea and no-one knows where they are hiding until the next winter starts…Why? We don’t know (yet)! 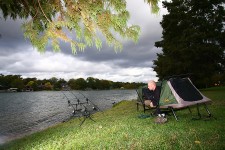 The fishing is even more difficult because the Buffalos inhabit the shores which are all privately owned. It is impossible to get a boat, look for the fish and then settle down at a private shore. America, the land where ‘almost’ everything’s possible; at least for fishermen! Luckily, Jason had the opportunity to fish at some hidden places where we were usually not allowed to fish.

The feeding behaviour also caused us some headaches. At Lake Austin we experienced an event where we started throwing in huge amounts of bait and not a single fish appeared. After we threw lots of food into the water the Buffalos made no appearance. Until we stopped using so much baits and just used some method mix we suddenly got a few Buffalos bites. At Lake Fork, Jason experienced that once you spot a Buffalos you can’t feed them enough.

However, this isn’t always successful. I tried with my buddy Mike the same strategy as Jason. Everyday we threw dozens of particles into the water and we didn’t get any bites. Not because of the Buffalos, it was because of the Common Carp. In this particular week we didn’t fish any Buffalo. Fishing Buffalos is crazy. Fun and frustation are close to each other! 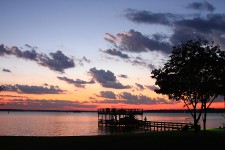 Mike and I made even more mistakes. After a while we tried to use bigger baits to get rid of the annoying Commons, so we could fish some Buffalos instead. It took us lots of fishing nights to realize that we caused the opposite. Buffalos have tiny mouths and love very small baits. Just a single Tigernut or 1-2 Boilies with a 10mm caliber made the Buffalos go crazy to bite into the Angel. At Lake Austin I witnessed a guy who caught lots of big fish in a couple of days. He also caught two 50 pound Buffalos with just one single 10mm Boilie. Mike and I had almost the same experience at Lake Hubbard. We caught our Buffalos with single Tigernuts and a hook in size 8. With bigger or even more baits we still didn’t get any bites: The baits are smaller than a pinhead and the fish are heavier than a bag of potatoes.

Altogether we used the same montagen as at home and because of the small baits we only used hooks of the seize 8 and 6. It was very rarely that we lost fish with these hooks. Catchin was much more succesfull with small bait and small hooks.

This entry was posted in Profiles and Angling Stories and tagged carp fishing, florian laufer. Bookmark the permalink.