Time For A Quickie 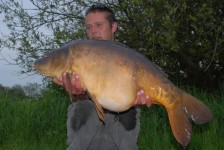 I’ll be totally honest with you, whilst I love Carp obviously, they’re nowhere near the obsession they were with me back in the 60’s, 70’s and 80’s. Then I was Carp crazy and now, to a degree, I can take them or leave them. However, that said, it’s not always the case. Kingfisher Fishing Club member, Steve Benson, recently had three fish that blew me away. I was privileged enough to photograph all three – all mirrors, all thirty pluses and all stunningly beautiful. The more I looked at them and the more I’ve looked at the pictures since, the more I realise I’d really like a big English fish again.

The problem is, though, I do lead a fearfully busy life. It’s not really on anymore for me to spend days in the bivvy. Even if I wanted to, there’s just not the opportunity. So does that mean, necessarily, I’m doomed to failure in my quest?

It seems to me down at Kingfishers, that far more members these days are actually just popping in for a lightning session. Stuart, one of our stars, appeared the other day for just two and a half hours. He considered a thirty mile round trip well justified for just a crack at a fish. And do you know what; he lost a Carp guestimated at well over thirty in just that short period. Perhaps, then, following Stuart’s example, I have some chance.

So what’s my strategy for the coming summer? Well, this won’t be barrow stuff. I’ll have a couple of rods – one a traditional bottom one and a second made up with a float – a few bits, a net, binoculars and an unhooking mat and that will be about it. It will mean I can move and I can move again. If I’m just ten minutes in a swim and things don’t feel right, I’m up and I’m off. That’s where the binoculars come in. Any sign of moving fish anywhere round the lake and I can be on them in minutes. 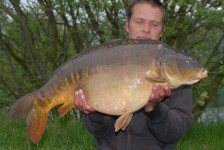 Steve and a recent 30

Of course, being this mobile means I can make every bit of use of every minute of short stays. If the wind moves, I can move with it. If there’s a mayfly hatch coming off anywhere around the lake, I can be there almost certain there will be Carp taking the insects on their way up through the water column. I can fish the weed beds intelligently – an area where many Carp at this time of the year are hoovering up Bream and Roach spawn.

As I’m down on the Kingfisher Lake probably four or five times a week, what I will be doing is baiting up heavily a few marginal areas that I like the look of. I’ll keep bait going in where I can see it in the crystal water through my Polaroids and I’ll be keeping a constant check on it. By monitoring so many times each week, I can tell what bait is going and where. With luck, the time will come when I will chance on Carp actually feeding over it and then we’ll really see.

I’m thinking crushed boilies are going to do the job best. I’ll probably bUy them off Jonathan who’s making them up and selling them commercially, though at much cheaper rates than you’d find in the shops. And as his boilies work, I’ve got huge confidence. I’m half tempted to mix the boily pieces with hemp but, then again, I’m always a bit afraid of the little seed. I remember only too well back in the 70s when hemp was on everybody’s agenda and we got the Carp bubbling like a witch’s cauldron. We’d never seen so many fish going so manically. Catching them, though, proved the most monstrous of headaches and I’ve tended to avoid hemp since.

A float rod for this type of purpose is an absolute must. I’ll very probably use a Hardy Marksman Avon for this particular job. The eleven foot six might prove a real winner. Ally that with a centrepin and I’ll have no qualms about playing a thirty plus on twelve or fifteen pound line. I can’t remember the last time a Kingy Carp was actually caught on the float…if there ever has been one. It’s often that a completely different approach can have a very unexpected result.

Obviously, I’m aware of the problem of the line cutting almost vertically through the water column but I’ll be fishing well over depth with a lot of that line nailed to the bottom. 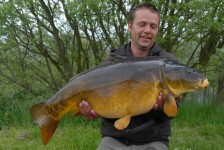 How do I rate my chances? I think it’s going to help me if the Kingfisher Lake remains as crystal as it is now. Sighting a fish is really going to cut corners for me. I think it also depends on the weather. If the summer warms up, I think I’m going to stand more chance of ambushing a fish in the weedier shallows. If conditions aren’t favourable, I rate my chances probably about three to one against but if things go my way, then I’m looking at a fifty-fifty scenario, I think.

But I’ll obviously keep you posted. A thirty on a float and an Avon forty-five minutes into a three hour session is just about my current idea of paradise.

This entry was posted in Profiles and Angling Stories and tagged carp fishing, John Bailey, kingfisher. Bookmark the permalink.