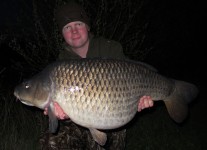 A big common caught in thick weed thanks to drop off leads!

To me losing the lead has started to play a big part in my fishing. Don’t get me wrong I don’t like to chuck away money but I honestly believe that it will land me more fish. Once the fish is hooked the lead becomes a hindrance and if I can get rid of it then I will – and I think not getting rid of them loses a lot more fish than people realise.

There are times when it becomes a higher priority than others, such as weedy waters it is pretty much essential but when catching a lot of fish on runs water it becomes impractical and far too costly so you do need to evaluate the situation you are in. I just want to run through my take on it all and what methods I use and when they can and can’t be used. 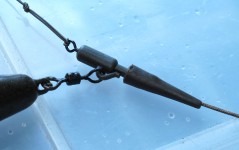 Leadclips are cut right down

This is the method most people will have probably used at some point. If I want to actually get rid of the lead on the take I will cut the arm right back and barely push the tail rubber on at all, this can easily be adapted depending on how easily you want the lead to come off. You can use this in practically any situation but just a quick note – if you are using this with a PVA mesh bag or similar that is directly on the hook it would be advisable to wrap a bit of PVA tape around the lead clip as without, it can cause the lead to come off on impact to the water!

You will probably have seen something similar to these as you can get a kit that will do the same job, but they are so easy to make yourself. Originally it was academy manager Ed Betteridge who showed me how a few years back, and since then I have never looked back.

So to set this up, rather than having a lead on the end of your helicopter rig, just attach a standard swivel. Now take a short piece of lead core and remove all of the inner lead and splice a decent sized loop in the end, attach this to the swivel by either splicing or knotting it – either will work and that’s the hardest part done. 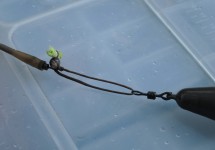 All you need now is a bead that is larger than the eye of the swivel, I normally use around 5mm (it must run up and down the lead core with just a little bit of resistance to work properly) and also a PVA nugget. So it’s just a case of first threading your lead on, and then poking the lead core back through the bottom eye of the swivel, with a baiting needle thread on your bead and finally place you’re rolled up PVA nugget through the spliced loop. Once in the water the PVA will dissolve and the bead provides enough resistance to get your lead back but will come off with a bit of head shaking once a fish is hooked or on contact with weed or snags.

It’s surprising how powerful cast this setup will withstand even with a large lead. It’s a great way of dropping the lead and saves messing about with tying lead on with light mono which makes it hard to cast any distance and can be quite dangerous if you end up cracking leads off! Hopefully the pictures will show it a bit better.

I can’t stand fishing chods with a heavy lead and I’m reluctant to use anything above 2oz because of losing fish, so this is perfect for those situations where you want to fish chods at long range with a big lead and you know that the lead will come off and once this happens you very rarely get unexpected hook pulls. To put it into context I was using this method one spring fishing singles at maximum range, due to fishery rules it was barbless hooks but out of a dozen fish I landed every single one and I’m positive that dropping the lead played a really big part in that.

This is my final method of dropping the lead that I use, again it has become quite popular recently so I won’t go into too much detail of setting it all up. Out the three this is my least used. 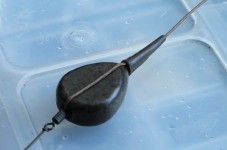 The Drop off inline

Although it can be cast I only really use it when fishing baits close in and it is excellent for stalking when dropping rigs close in. This is probably the most reliable as there is no way that lead is staying on once a fish is hooked and tension is applied from both ends so for stalking fish near snags it is perfect. Generally I will use it with a flat inline lead anything 3oz and upwards.

Hopefully that gives you a bit of an insight into not only how to set these up but also the thinking behind it, as mentioned there are situations where it’s not practical to use them but especially on lower stocked waters I would always consider using it – you never know it could save you from losing a fish of your lifetime!

2 Responses to Losing The Lead