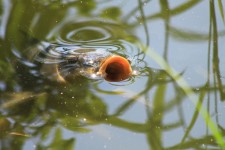 Catching on the surface

I guess, over my Carping years from the present day right back to 62, I’ve caught at least fifty percent of my fish off the top. There’s been good reason for this. When I began my Carp fishing it was firmly back in the Crabtree era with baits and methods so primitive that to catch a fish traditionally from the bottom was a next to impossibility. Par-boiled potatoes simply have never been a good bait. However, in the text, Mr Crabtree did advise floating crust for Carp and that was the route that I increasingly took. In fact, between the ages of eleven and twenty-five, every Carp I caught came off the top, nearly always to crust. Today, I’ve had one English forty off the top, three English thirties and possibly upwards of fifty twenties all on surface baits.

Having said all that, surface baits can drive you insane. Whilst Carp on many waters love them and are happy to feed in the upper layers, they’ll still almost always prove hugely difficult to catch. There’s a mass I could talk about here. Floating bait waters. Areas on those water where floating baits will be taken. The body language of properly feeding fish. Smart baiting practices. It goes on and on but our editor has asked me to stick to baits alone and, in this piece, that’s what I’ll do. 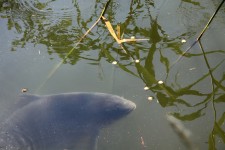 Let’s begin with crust. It’s our old faithful. Personally, I’ve always gone for a pan or a farmhouse style loaf and, preferably a day or so old. This gives the crust time to harden just a little bit which makes it easy to cast and helps it withstand the battering of small roach and rudd. There is little complex about this. I break off a piece about the size of a matchbox, if anybody remembers those anymore, and then I push the hook through from the white side until it is sticking out proud on the brown side! I then wrap the line round a couple of times underneath the bend of the hook and then push it back so that the point is covered. It’s all a bit of a Christmas parcel affair but there are reasons for it. A piece of crust presented like this withstands distance casting if well dunked. It will also stay on longer, as I’ve said, when pestered by small fish. I’m not alarmed that the point is hidden because, almost invariably, the hook pulls out when the crust is taken properly and if you strike with enough power. That’s one of the keys. You wait until the line tightens and you don’t strike at just a big boil. Once that line has tightened, you really give it a bit of heave-ho and you’ll be into your fish. I do, from time to time, flavour crust. Honey really does work. There’s no doubt the Carp pick up on the scent and hone in faster. Nearly all the modern Carp attractants work, too, providing you use them very, very sparingly indeed. Honey you can simply slap on!

We all now know about the incredible properties of Chum Mixer biscuits and the like, a particle floater that wasn’t dreamed of in the 60s when I began my trade. If you bait correctly with Chum Mixers then you can really drive Carp into a frenzy but that’s probably for another piece. Sticking with the bait itself, the first problem is how to attach a Chum Mixer to a hook. That hook should, in my book, be around about a size 10, perhaps an 8 if you’re looking at big fish in difficult situations. You can glue Mixers to your hook, you can band them, you can hair them, you can use all manner of plastic imitations and even ones made out of hair and bristle. You can obviously, also, buy soft floaters commercially which are flavoured, coloured and perfect for side-hooking. Myself, I quite like to put some Chum Mixers in a robust plastic bag and pour just a small amount of boiling water on them. I then blow air into that bag, make sure it’s sealed so the air can’t escape and then shake the Mixers for a good few minutes. They come out soft, fluffy but still robust. If you wish, you can also put colouring and flavours in at this moment. 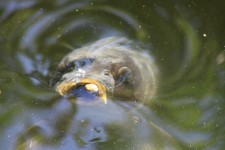 Over the long years of floater fishing, I’ve also had success with all sorts of weirdoes! Marshmallows will sometimes take fish and it’s not a bad idea to try out endless varieties of different sweets to see which actually float. I remember having a bit of luck with Maltesers many years ago though I don’t know if modern recipes still render them buoyant.  In the end, it’s not necessarily the bait when it comes to floater fishing. At least fifty percent of the game lies in the presentation and this might make a very useful follow-up piece for The Session, perhaps.