Common off the top

Looking through my old fishing photographs it’s hard to believe that 35 years have gone by since I first picked up a rod. An angling instinct is inherent to me; it’s something I was born with passed on by my father.  Dad, who started fishing aged 6, is a hunter gatherer and later in his life monetised his passion by opening a chain of tackle shops in the North West. I worked in those shops from a fairly early age and was exposed to all manner of angler, bait, and theory, and so I was inevitably introduced to the mystery and madness of Carp fishing.

I can’t remember the exact year but I’m guessing it to be around 1984. I was a young teenager riding around on my bike, or playing computer games whilst really waiting for the next chance to go fishing. My mate’s older brother, Andy, was a Carp fanatic and he offered to take me on an overnighter to a local Carp lake in Lancaster, my hometown. I’d caught Carp before then, but not of any size and certainly no captures that had been engineered. In my very early fishing years I was simply happy to be on the bank and whatever took the bait was just fine with me.

Andy was a local angler we all looked up to. He worked in a factory, had an Escort XR3i, rolled his own bait and, more excitingly for us, owned a set of amazing Optonic bite alarms. Back in those days, especially for a teenager, such luxuries as bite alarms were well out of reach and most of us had to make do by listening out for the clutch to sound. My indicators were folded crisp packets hung over the mono near the butt guide. One rod was a 1.75lb TC through action, the other was a cut-down 13’ Kevin Ashurst float rod! But Andy was in another league. He had all the gear, and a pretty good idea. At least it seemed that way to me at the time. 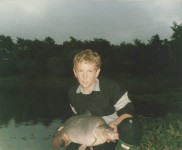 Twilight common off the bottom

In exchange for helping Andy to roll bait, which back then were white and red maple cream boilies, Andy would take me with him whenever I fancied fishing. And that was how I cut my Carp teeth. The holidays seemed to go on forever, and quite often I’d be on the bank for 3 or 4 consecutive nights, sleeping on my mum’s floral patterned sun lounger underneath a 50 inch umbrella. No sleeping bag. Just a zipped up hooded Parker coat, hands stuffed in my jeans pockets to keep them warm. Thinking back it’s amazing that I fished exclusively for Carp for so many seasons – I wasn’t exactly fishing in comfort. But the Carp bug had bitten me and it wasn’t letting go.

Bolt rigs had just come into play, at least to my knowledge anyway, although I wouldn’t be surprised if they’d been around much earlier. My set up was a 2oz lead attached to a stiff 2 foot tube, threaded onto the reel line and locked in place by a couple of swan shot. Below the tube a 12” hook length was attached to a swivel, with a hair rigged boilie or flavoured chick pea as bait. And that was about as complicated as it got. No stiff hinged or combi rigs. No balanced baits or coated braids. But we still caught Carp. And they were truly great Carp for back then, even though their weights in comparison to today’s fish were much smaller.

Our local 2 lakes held Carp to 19lb and 17lb respectively. These two known fish were mythical creatures and only the extremely lucky or extremely skilled ever caught them. It amazes me today how fish into upper teens are not considered to be big fish! In fact just the other day I was talking to a chap who’d only recently started Carping, and was off to Manor Farm because he wanted to land a 40 pounder. Whatever happened to learning your trade? Catching wily crucians on flake or stalking a low double off the top? It seems nowadays that the majority of anglers simply want to drop on a day ticket and land a monster. 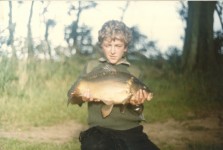 I improved my tackle slowly as the teenage years went by. I saved my Saturday job money and bought a single ‘Beacon Bite Alarm’, a crude and unreliable device that buzzed like that board game called ‘Operation’, but only when you got a screaming forward run. Dad gave me a couple of 2lb TC blanks from his shop and we built them into half decent Carp rods. And then I suddenly became aware of the fashion aspect surrounding Carping. I noticed how some anglers reacted when they walked into other swims, scoffing at certain gear, or the lack of it. A level of what I perceived to be competition was growing rapidly on my local lakes, and I started to become uncomfortable on the bank.

Fishing wasn’t, at that time, competitive for me. It was fun, and it was (still is) my own private retreat. I couldn’t understand why, over each season, my passion was being dragged into a game of one-upmanship. The final straw came when I arrived one day with a shiny new rod-pod, the first to ever hit the market. I literally got laughed off the lake! And that was the end. I’d had enough of the local snobbery and back-biting and so, aged 19, I turned my back on Carping forever, or so I thought…

Fast forward 22 years to today and I find myself as the Coarse, Carp and Predator Marketing Manager at Hardy & Greys Ltd. The path on which I arrived here is unimportant, but what is significant is that I now speak on a daily basis to our team of consultants – some of the best anglers in the country. On top of that I need to keep abreast of competitor products, and have an eye on all media formats including the vast array of Carp magazines. I’ve found myself reading about KD and withy rigs, chods, hooking angles and all other manner of Carp related information. It’s truly fascinating to see how technical modern day Carping has become, and of course it was only a matter of time before I started itching to get back amongst the fish.

A few months ago I started gathering kit in preparation for my journey back into Carp land. My first couple of day ticket sessions coincided with spawning and were fairly uneventful. They were mostly spent sat inside a bivvy watching the rain outside come down in torrents. But it wasn’t too long before I got back amongst some Carp having been fortunate enough to receive an invite to fish a private lake in the midlands that holds some cracking lumps.

I won’t bore you with a step by step blog of how the 2 days unfolded but needless to say they were, for me, absolutely fantastic. I was able to put into practice all the information I’ve been soaking up for the last 6 months, and I probably learnt more about Carp fishing in 2 days than I had in 2 years when I was a kid. I fished hard and worked for the 6 bites and 5 Carp I landed. There were some fraught times as I battled fish under trees. There were comedy moments when I had to go into the lake to recover an alarm head, and even more laughter when I discovered that Carp can escape from flotation weigh slings if you don’t clip the zips together!

And finally, after more than two decades, I landed a twenty, a new PB at 23lb. The fish, a known and named character, is about 25 years old and has been previously caught by some of the UK’s most famous and well respected anglers. He’s even had the misfortune of having a scale nipped off by a neighbouring farm dog years earlier. Sprinting down the bank of an eerily still, mist-shrouded and drizzle soaked lake, at 4.30am as my alarm screamed and a bow wave drove across the surface is a fishing memory that will stay with me forever. Do I wish I’d landed one of the 30’s, 40’s or even 50’s that the lake holds? No chance. Fishing, for me, shouldn’t be like that. I’d rather learn my trade steadily and surely. 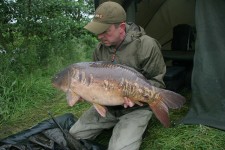 So now what? Well, the golf clubs have gone back into the garage and I lay in bed at night thinking about shrink tubing, line-aligners, curved shanks, dropping leads, silt beds, PVA stringers, back-leads, camouflage tubing and bigger baits. I’m looking for a syndicate water and trying to persuade my wife that I’ll still be able to fulfil my duties as a father and husband if I fish just 2 nights every other weekend. I’m fining down my kit so it’s as light as possible. I’m tweaking known rigs and dropping them into the bath at home whilst my 9 month old son splashes around at the other end. Barbless hooks and slick clips of course. I wouldn’t want him to get tethered.

And so the madness returns…

One Response to The Madness Returns