Day ticket Carp lakes happened on the whole by accident. Match fishing in the 1980’s and 90’s was very popular and lake owners were keen to offer lakes that would keep match anglers catching large nets of fish.  To achieve this, they decided to stock their lakes with strong and hard fighting fish. They needed a breed of fish that would cost little to stock, would last well and grow strong.  Fish breeders only had one fish that would meet this need, Carp.  These fish were being stocked by the tonne in many match lakes and would give match anglers great sport. 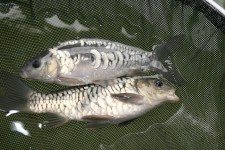 The Carp were stocked when they were very young, about 1-2 seasons old weighing about 1lb.  However, these tiny Carp grew very quickly and put on lots of weight due to anglers feeding them with hi-protein and Marine halibut pellets rather than maggots.  This meant that the match scene soon started to change and evolve.  Match anglers, who would normally be using small hook and baits trying to catch just a few pounds in weight of silver fish, now had to step there tackle up quite dramatically to cope with the ever growing size of Carp they were facing.

With media coverage for Carp fishing growing year on year and a ready supply of lakes full of large hungry Carp to fish for, Carp fishing was set to grow vastly and become the multi-million pound industry it is now.

Well stocked (hi biomass) day ticket waters have one thing in common – the fish are hungry all the time. The only reason the fish grow to the size they are is due to the huge volume of high energy food: pellets, ground bait, boiles etc which are thrown at them almost every day.  If these fish were left alone with only naturally occurring food to live off we would see a dramatic reduction in the stocking levels.

If we know these fish we are targeting are hungry, surely it must be simple to chuck any bait or rig out into the lake and bag a fish?  Well this may have happened when the fish were first stocked but they very quickly learnt how to work out a bait that had a rig attached so now we have to try and ensure our rigs are presented as well as possible to be in with a chance of catching a fish.

Fishing is very simple in its most basic form – you need to firstly be in front of fish as if you have no fish in front of you can’t catch them, simple! Secondly, you need to present a food source (bait) that the fish are prepared to pick during the time you are at the lake. Lastly you need to present the bait on tackle that the fish will be prepared to pick up but also strong enough to land the fish once it is hooked. Get your basic steps correct and you will be more successful.

If you miss any one of these key factors you are camping rather than Carping. As a coach I often see anglers missing some of the basic elements of fishing but the one I see most misunderstood is the second one, bait. 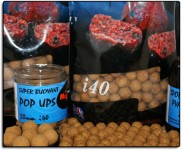 For me good quality bait is the most important element in my fishing closely followed by sharp hooks and correct rig application. So why does everyone moan about bait costs? Have any of you tried to make your own bait? I have and I have to say it is very, very, hard work – smelly, dirty and tiring. And, despite buying the very best ingredients and getting top advice, the results were a spectacular failure and a massive waste of my time and money.

Today I get the best bait I can from one of the best and longest running bait manufactures in the UK, Mistral Bait. However good your bait is you still have to develop your understanding of the lake you are fishing and use your bait wisely to get the best from it, especially on modern busy day ticket waters.

It has been well documented that Carp can get very wary of standard round boilies. This is totally understandable when you realise how many thousands of kilos of boiles are put into our lake every year. Carp will eat these and realise they are a very good food source however, if caught enough they will soon start to look at standard 15mm/18mm boiles as a source of danger and leave the boiles alone. 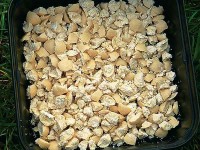 To overcome the Carps’ fear of round baits, two different strategies are being employed by Carp anglers. The first is simply chopping up the boilies and feeding these out into the lake with a mixture of pellets, hemp and corn. The chopped boile is now no longer round and is often a random shape  which means it flutters and moves around the lake bed as Carp feed in a very random manor. The chopped boile also exposes the soft inner section of the boile which allows the full flavour to leak out far more rapidly. This simple strategy has given angler an edge and has made it very difficult to recognise a bait with a hook attached to it compared to a free offering.

The other benefit of chopping boilies up is that you get a far larger quantity of boile bits than the original 18mm boiles when kept whole. This will of course mean you can keep the fish feeding for longer over you baited area meaning you have got a longer window of opportunity for the feeding Carp to make a mistake and pick up the baited rig.

The next is washed out bait, A washed out bait is a bait that has been kept in lake water for 72 hours and has absorbed lots of water, losing some of its original colour. This pre-soaking is done in an attempt to make the hook bait look like it’s been sat on the lake bed for 72 hours and therefore is safe for the Carp to eat. This is a very valid thought and has bagged many large and wary Carp from day ticket waters throughout the UK. However, it does have its problems the main one is the boile will become very soft during the prolonged soaking and this softness make it almost impossible to keep on the hair during the cast as the fine braid haircuts easily through the soft pre soaked boilie. I have been using a number of ideas based upon the washed out boile theory. The first I have been using is to select a boile which is already very washed out in appearance and for this I have been using Mistral I40 which is a nice soft almost sandy brown colour which looks pre-washed out. Its gentle nutty flavour is also not too strong so does not put the fish on guard as a strong smelling new bait might. 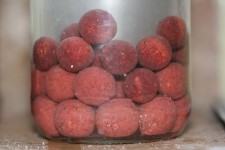 The second bait I have been having great success on is Mistral Coconut Ice which is a very sweet coconut smelling bait in a bright white colour. Both of these baits are for me a great starting point for bagging pressurised Carp. However, we can never sit still and we must keep looking for that next new edge. With this in mind I have been trying to get a standard boilies to look like washed out bait but in minutes rather than hours.

A washed out bait looks swollen and it will show a halo-effect as the boilie dyes and flavours form around the outside of it and they start to bleed out. The only thing I could get to mimic the halo effect with was paste which worked very well but is very difficult to keep on your bait as you try and launch your baited rig across the lake, let alone as it hits the water with such force. So for a while the paste wrapped boile idea was shelved until I found a non melting plastic PVA style stocking mesh. Now I could combine the paste around the boilie and be confident it could stay around the boile throughout the cast and all the way to the lake bed. 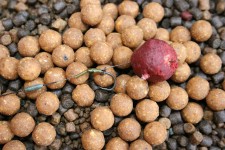 On my first outing I got a 10mm I40 boilie, some paste and started by putting a little bit of paste into the boile tube covered by the plastic stocking material. I then put a 10mm I40 boilie into the boile tube on top of the paste. I topped off the boilie with a little more paste, pushed the paste boile wrap out of the tube and tied it off as you would do a normal PVA bag.  A lot of paste is extruded through the stocking as you tie it off but don’t worry there is plenty of paste left. Now I put the paste boile onto my rig and it’s ready to cast out into the lake. Once in the lake the paste will immediately start to break down and create the halo effect I am looking for. I have no worries about the effectiveness of the rig or its longevity as the 10mm I40 boile will always be on my hair if the paste has washed off or been attached by nuisance fish.

This new strategy has been very successful for me on my day ticket waters with this great looking brace of upper double figure common Carp caught during a recent session. The interesting this is all the locals were telling me the lake only fishes well at night and as the picture show these were both day catches.Obviously whatever I was doing the Carp really liked and as such they were prepared to feed on my boile paste baits confidently during the day, when the local fishing normal boile approach were struggling to get bites.

I hope this article has inspired you to review your own fishing a take a long hard look at what you are using and how you are using it.

This entry was posted in Techniques and Methods and tagged carp fishing, day ticket carping, ian gemson. Bookmark the permalink.