I’m very proud these days to be writi­ng a weekly column for the Angler’s Mail and, as a result, I see the paper on a constant basis. One of the things that I have noticed is that ‘special’ Carp are now attracting a lot of kudos. It seems today that a Carp doesn’t simply have to be massive to be desirable. Sometimes smaller Carp with a bit of a history or with especially good looks are right up there as massive trophy fish.

It’s been quite interesting looking through my own photographic album to pick out some fish which really have turned on both me and the anglers on the bank on the day of their capture. These are the sort of special fish I’m talking about. Some of them happen to be large, but not all of them. It’s generally aspects of them, apart from their size, that make them special and make them applicable to this rogues gallery, as it were! Let’s have a look at what I’m talking about. 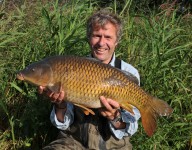 Here you’ve got me and a super common which I’ve watched over the years. You can see the Otter scar on its flank which four years ago, when the fish was about eight pounds, was very red and raw. Over the years it has healed and the fish has grown quickly to be a big teen. I didn’t weigh it this time but it could even have nudged the twenty mark. It’s obviously healthy, it has obviously recovered and whenever I see it I feel happy to be a part of this Carp’s progress. 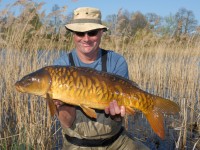 A Carp doesn’t have to be forty-odd pounds to be beautiful. Old mate Ragi is cradling one of the most gorgeous Carp I’ve seen for years. Those scale patterns make it immediately identifiable and even though the fish is only creeping into the low doubles, a lot of guys have expressed admiration. There are times when less is more. 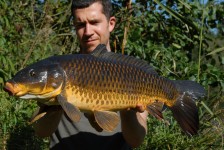 To be honest, a bit like Ragi’s fish, I love the dash of the exotic. Neill is holding a low double but it’s the colouring that makes this fish just so sensational. It’s a common with a dash of something, quite what I just don’t know. Neill, of course, is a Drennan Cup winner and he’s caught some massive fish in his career but he was over the moon with this particular character. And so he should have been. 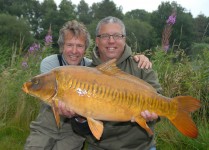 Perhaps this photograph of me and captor Bond with The Peach is the best example of the exotic that I have in my library. This, I hope you will agree is the most stunning of Carp. It’s a mirror with a dash of something truly extraordinary. The fish was upper twenties and the fact that it was caught off the top made it supremely special. I know one or two anglers have been after it in the three years since Bond had him without success. A real target. 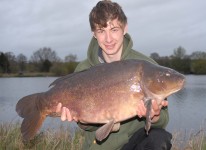 Now we’re really into the realms of Grand Old Carp. Here’s Billy with a regular attendee at Kingfisher. Notice those gorgeous pin scales. These are the sort of Carp that you really want to catch for their looks and for their history. Doesn’t he look a happy lad! 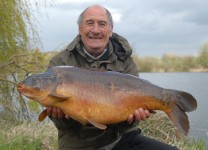 And here’s dad, John, with a fish of similar character, looks and history. The fish reminds me a little bit of the famous Redmire fish called Raspberry. Just look at the colour, shape and scale patterns of John’s fish. It’s that beautiful belly that does it for me. 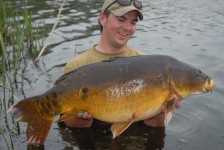 Check out the white tips on this beauty

Now here’s a fish that combines history, looks and the exotic. I’m talking about the magnificent White Tips. No wonder Luke looks delighted with this fish which I believe he targeted for at least two years. Nice to see it being held so lovingly in the water and even though Luke got pneumonia afterwards, I believe he felt the fish was quite worth everything! 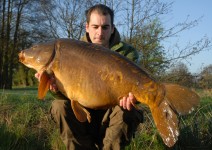 And here’s another magnificent fish of exactly the same ilk. Johnny is cradling Big Tail at a weight of around the mid-thirties. Okay, the fish is truly big but it’s that tail, the colour and the overall majesty of the fish that makes it so magnificent. These really are incredible creatures. 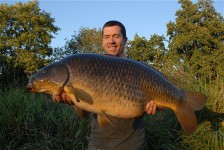 Let’s finish with a real sensation. Here’s Neill with a 40.4 common that blew us totally out of the water. Okay, the fish is massive. But it is the beauty and the perfection of this Carp that makes it just so special, so wondrous.

So there you are. Thanks to the Angler’s Mail. Thanks for realising that Carp are the most incredible creatures in their own right and that you can’t value them in pounds and ounces alone.

This entry was posted in Uncategorized and tagged carp fishing, John Bailey. Bookmark the permalink.