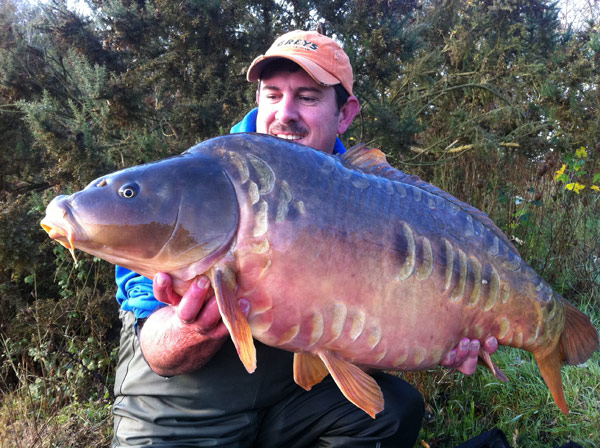 I arrived home after work one Friday having second thoughts about heading to the lake as there was some international cricket on the TV, but the weather was spot on and there was a chance. As soon as the car was loaded I made my way to Violet Fisheries. When I arrived I couldn’t believe it – the Northwyck Lake was empty! So I set up my kit in a swim called The Beech and immediately started to get my rods in the water. The farmer arrived for his usual chat as I continued to sort the rigs out in the fading light. Casting my last rod out with just enough light the farmer said, “I bet you are going to tell me that is exactly where you want it.” My reply was “well more or less” as it found a nice gravel patch amongst some silk weed and I felt the clear ‘donk’ as it got to the bottom.

I was confident, but I’ve felt the same on many other occasions and returned home unrewarded. I sat on my chair deep into the night for any signs of Carp but there was nothing. It was a lovely evening with no wind and some cloud cover, it looked very Carpy. I went to bed at midnight expecting to be woken up any minute, but it did not happen and my alarm woke me at 6am. 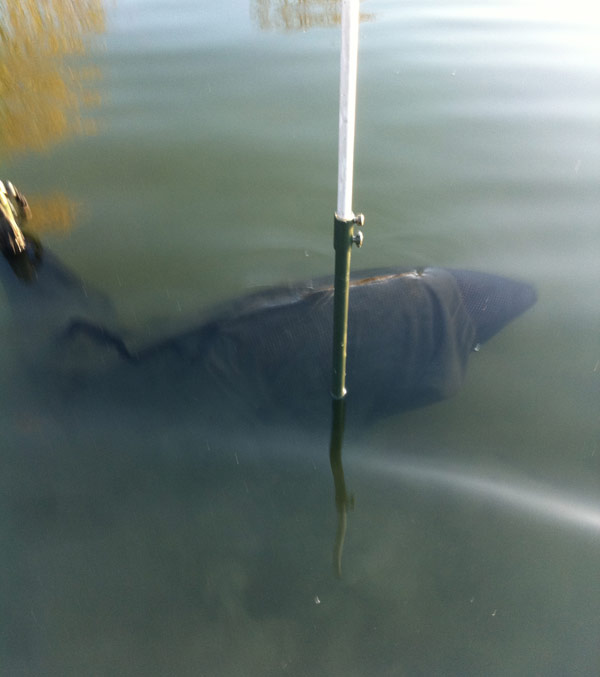 It was still dark so I decided to make a coffee and sit and listen for any signs of Carp… watching… waiting. The lake was calm and there was absolutely no movement. I started to lose confidence and thought it would be another blank session as I had to start to pack up at ten. I made another cup of coffee and decided to get out of the bivvy. As I got out my bobbin on the rod that I cast out last started to lift and as it got to the top it stopped. Picking up my rod it was solid, I could feel there was some weed on the line and thought it is only a small fish.

The fish was slowly swimming towards the island and gaining line. I soon realised that it was not a small fish as it was doing whatever it wanted, it swam towards a bay on the other side of the lake and there was nothing I could do to stop it. Trying to turn the fish I decided to keep pressure on and I eventually started to gain some line. My mind was racing, what is on the other end of the line? It was a strong fight and I have never felt Carp fight like this. There are a few thirties in the lake and the lake record is 37lb so I wondered, could this be a 30? The margin is very shallow where I was fishing as the water level was very low and I realised I would have to get my feet wet. The fish came in and his shoulders broke the surface and I knew it was the big one a fish called James. Needless to say my heart was racing as I kept on saying to myself “just don’t lose him!” He turned again for another run and, as he did the line pinged off his dorsal fin. My heart stopped as I thought he’d come off. He made a third run but I managed to turn him after only a few seconds and was determined to get him in the net this time. The water was too shallow so I had to pull my trouser legs up and take my shoes off to be able to land him. James was coming towards me and my knees were shaking, he slid over the net cord and he just kept on coming I lifted the net and let out and almighty yell! I thought yes “it’s huge” I got the sling ready and put it around the net to lift my prize out of the water.  Looking at him lying in the sling I could not believe how long he was, it then dawned on me, he could be a 40! Lifting him out of the water onto the mat I was absolutely dumb struck; he filled my Chub Euro Xtra Protection Cradle!

The first person I phoned was Shakey, the bailiff to do some photos. The scales was zeroed to ensure I get it accurate. I struggled to hook the sling on the scales, the needle went round and settled on 42lb 10 oz. I couldn’t believe it, I have just caught my first 40! I got the sack ready and put my waders on to let him rest before taking the photos. I’ve not set out to catch James’ but it goes to show, be in the right place at the right time and you will have some luck. The bailiff arrived very annoyed with me as he has spent the whole week in the same swim without a touch. What a great feeling!

This entry was posted in Profiles and Angling Stories and tagged carp fishing, guest writer, the session. Bookmark the permalink.

One Response to An Amazing Session