When I read most of the current crop of today’s magazines most of them disappoint me! Sorry and all that but they do. Why? Well I believe that the clamour for information from entry-level carping is so strong that the content follows a trend. The trend is how, when, where and how much! The missing conundrum for me is why! Why is very much an individual question with the answer being even more so, but I believe when people read a certain author they get used to what is coming. This is not a dig at my fellow writers – far from it. However, all I am saying is Carp fishing must be for you on your own terms. Never listen to people who try and put you down. I can remember one strange little clown once telling me I couldn’t write articles. For a while it got to me and then I realised that positive energy would always overcome negative. So, what has this rambling to do with Carp fishing? Well, not so much with general anglers who just want to catch Carp, but for those of you out there who are ready to target a big Carp… everything.

A while ago in The Session I wrote about being a maverick. It basically pointed out the traits of being individualistic in your approach and to coin a current phrase, free thinking. Well you will need this in abundance if you are ready to target a specific big Carp. 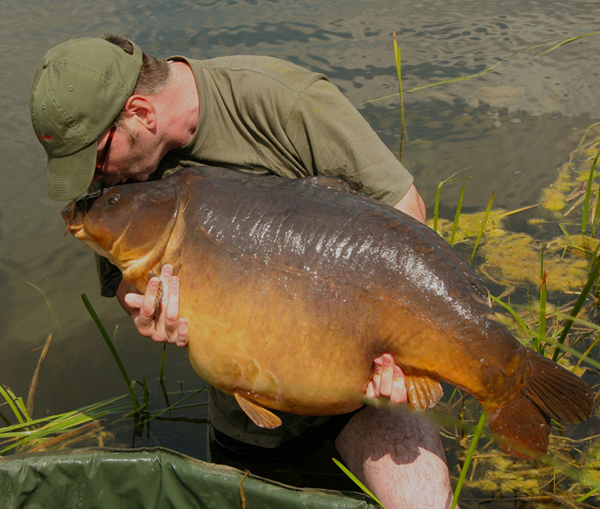 Within the ranks of the Greys & Chub Academy we are blessed with Carp anglers who have adopted this approach from time to time. Ed Betteridge, Dave Moore, Matt Eaton and myself have all had periods within our Carp fishing lives where we have identified one Carp we want to catch and attempted to do that. In fact I dare to suggest that we have been quite successful at doing this. However let me throw a word of caution in here… be careful what you wish for! Think of it, a lake contains just 100 Carp and trying to get a bite from that one fish is at best 100-1 shot but given the fact that repeat captures can constantly happen the odds go further and further out. Alternatively you might drop lucky and catch your target fish early but think very carefully about having such a short target of success to aim for. 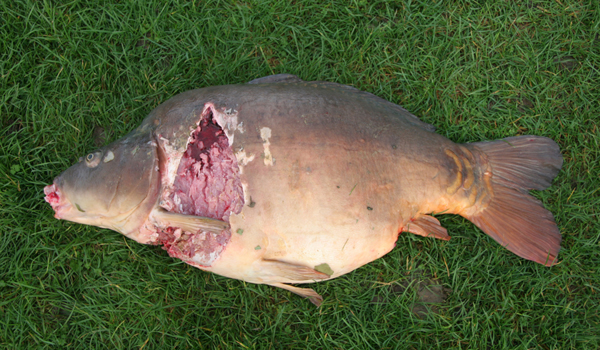 With Otter predation a real problem make sure your not fishing for ghosts. This 41lb carp is not going to be caught ever again is it?

The mindset of bounty hunting-style carping is something that is very difficult to transmit via the written word, and almost impossible visually. Therefore the current crop of media doesn’t often cover it. My wish for all Carp anglers is that at some point you do decide to target a particular Carp. The reason why I say this is because I believe it makes you into a better Carp angler. The single mindedness and toughness needed to get to the end of the rainbow is quite a challenge. Your mental toughness will be tested to the maximum and there will be times when you will question why you are doing something. I am not masochistic for a second but a single-minded drive is needed that will have you wondering why you are doing it? 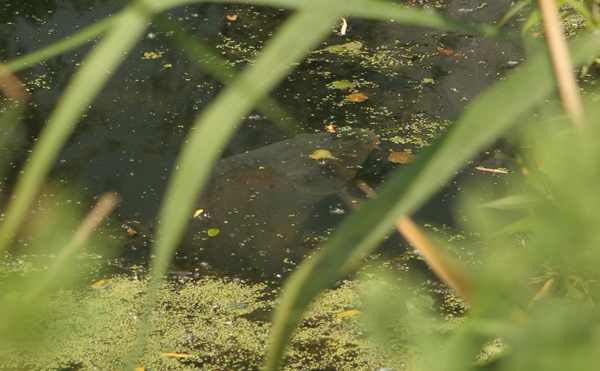 Seeing huge Carp like this monster holed up in the weed, is one quick way to bring the target Carp you are chasing to the bank. Time to get the stalking rod out methinks.

To try and combat that, I always carry a small photograph of the Carp I am after around with me. I cut off the captor’s identity and focus on the Carp. I try and visualize what it will be like when I drive away from its watery home having banked it. It may sound a little strange but this is part of my ritual. This is what you will develop along the way, your own way or style – strange little idiosyncrasies that you will build around superstition and habit. However be under no illusion as my old mate Jim Mathews used to say to me; “Holmesy, the most important three things to remember are that I may die, the Carp may die, otherwise I will catch it!” That unswerving belief is what drives me on when targeting a particular Carp. However, in a world of Otter predation and all other variants, just make sure you are not fishing for a ghost. We all know the waters where a Carp has not been seen, caught or found for years. Yes there is a chance that it can still be alive and evade capture, particularly if the water you are fishing has bank access problems but generally big Carp do get caught.

When people ask me about my tactics I always say the easiest and quickest way to target an individual Carp is visually and then to stalk it. Indeed, my personal best of 61lb 4oz was caught like this on a floater. In fact, I have used non-conventional tactics such as float fishing and surface fishing to catch four of my UK 50+ Carp.

The common denominator was freedom of access, I was able to move around the whole lake and the other is simple, identification. This last point is important. Be single minded and understand that if you just like to catch Carp, targeting a big Carp is probably not for you. The example of this in reality is moving the bait away from any Carp other than your intended target. It can be rather silly at times but when stalking big Carp you often get one chance to catch a Carp before the fish are wise to you and move off. If your target is a 40lb Carp and a 30lber approaches your bait you should move the hook bait away. Not easy to do as a 30lb Carp is indeed still a monster fish. That is the beauty of visual stalking and what can give quick results. 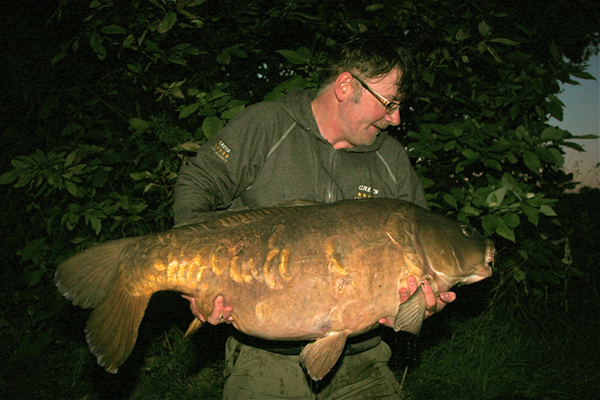 No longer with us the famous Blackeye. Big Carp are not immortal so go and get them. When I cradled this fella at 52lb 6oz caught float fishing I couldn’t stop grinning for a week. But is it worth the heartache? Only you can decide.

Sometimes though you can adopt a static approach and try and catch as many Carp from your target waters as you can, in the hope that at some point you will catch your target fish. The majority of approaches follow this style and you have to remember to steel yourself for whatever comes along. Sometimes it can happen quick and other times it can happen slowly. I remember chasing a male Carp called Blackeye from Chad Lakes in Gloucestershire. I ended up catching 43 Carp before I caught him. This was in a lake that only had 28 Carp in it! In fact in the end I had to stalk him on a float fished prawn. Now that was a story and half but for another time… 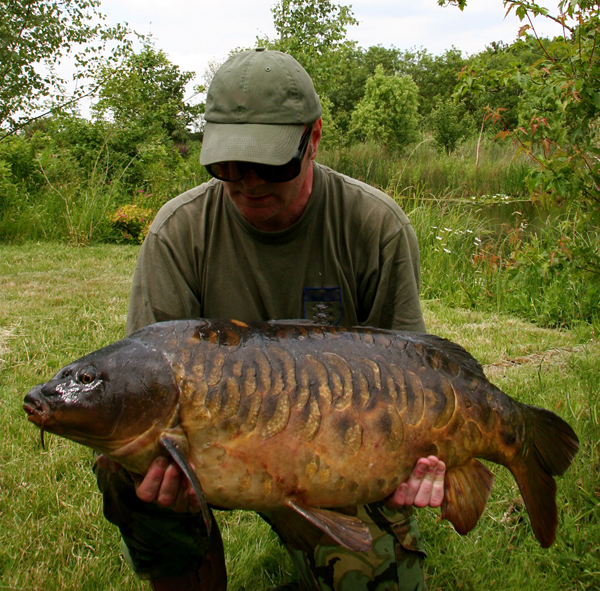 Can you believe it, this 30lb Carp is regarded by some as the best looking fish in the UK, yet Holmesy was disappointed with it at the time as it was not intended to take the bait. How bizarre is that?

The reality of targeting an individual big Carp is like all things in life, there is a happy medium. If you choose a water with a reasonable head of Carp, you can discover the inhabitants as they end up in your landing net, but still be focused that sometime soon your big Carp will come along. For the majority of anglers this compromise is probably the best start point. I have seen so many anglers fishing for just one Carp that it takes over their lives. Every time you are not at the lake you think you should be, every fish you lose is the target fish, every fish you see swirl is that fish and it becomes obsessive. Now for some this obsession is the way they target individual fish. However, a word of caution here: anything that is obsessive is also very dangerous. I have lost count of how many marriages, relationships, employment and friendships have been sacrificed in the pursuit of large Carp. Try and decide if this is really for you. If it is, then I wish you the very best of luck, however as the title of this article says, once you cross that line, there is no turning back.

Targeting big Carp is a lone pastime when you have to have a steel determination that you are doing it right. Holmesy believes a certain mental toughness is essential.

Good luck and I wish you all the success in the world. Remember effort does equal reward in Carp fishing and as long as the end result brings you what you want, so be it.

We are currently running a competition to win a 24 hour session on the bank  at Lakeview with Mark. Find out more and enter.

This entry was posted in Techniques and Methods and tagged carp academy, chub and greys carp fishing, mark holmes. Bookmark the permalink.