“I didn’t really know what to expect from Longleat Show. Most shows I attend are indoor events so it was a positive change to have an outdoor event where we could talk to the public in an actual fishing situation. I had never visited Longleat prior to the event and I have to say it is a very impressive venue. Two miles after entering the grounds I followed the winding road through the rural estate and the view of the 16th century house, grounds, and tiered estate lakes were impressive to say the least! 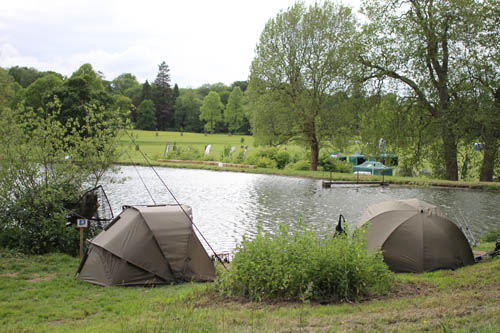 Our swim situated on lake 3

“I was fishing the top lake at the show (lake 3 as it was advertised) with fellow Greys & Chub Academy member Matt Eaton. We arrived Thursday afternoon and chose our swims. We baited up and headed towards the Hardy & Greys marquee stand to meet the team.

“The stand was in a fantastic location on the banks of the bottom lake and overlooked by the house. I received a quick lesson in fly casting to brush up on my technique that had been untested for over 20 years and it wasn’t long before I was trying to catch one of the small Carp from the lake on a deer hair fly. 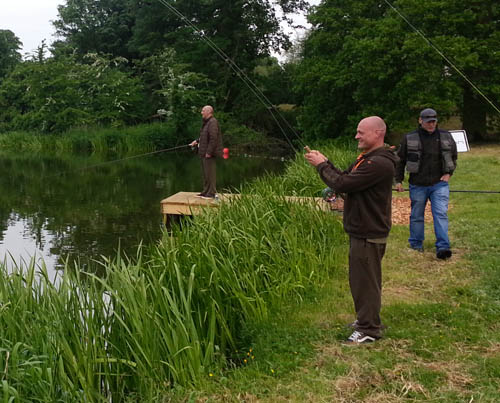 “As the evening wore it was quite amusing to watch some high profile names across the different disciplines of angling trying relentlessly to catch some single figured Carp, whilst being watched (and taunted) by ‘Mr Crabtree’ AKA John Bailey and show organiser Chris Ogborne.

“What myself and the coarse lads lacked in fly casting prowess we made up in knowing how to get a swim going, and it seemed every time we had a group of fish feeding a 7 weight line would cross ours in an attempt to poach a fish! It was great fun and we all caught a fish or two. The highlight for me was watching Matt bank one on a Hardy’s double handed Salmon rod! Check out the footage of Matt on our Greys YouTube channel. 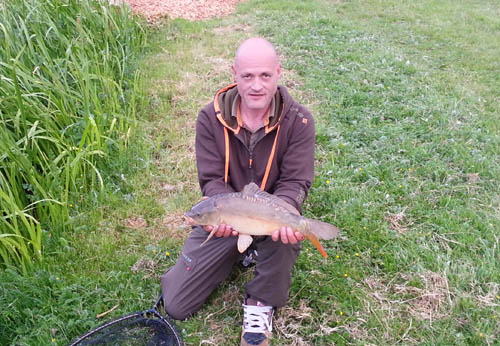 Matt with his prize catch landed on a Salmon rod

“We didn’t fish the top lake the first night, opting instead to bait up and rest it for the show hours. This plan didn’t really work for us, or anyone for that matter because very few (if any) fish were caught in daylight, I think the fish had spawning on their mind. We met a lot of people and did a few demos and talked about all things Carp. It was a great way to talk to people in a fishing situation where we could show the kit that we use, demonstrate how it worked and how we fish, instead of being inside an indoor arena. 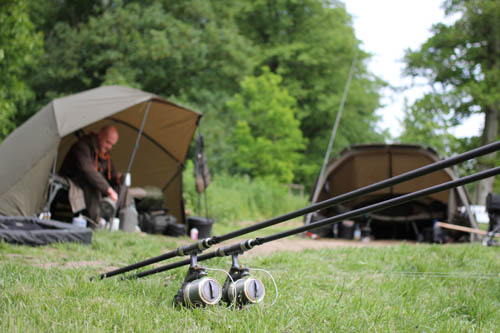 “We decided to fish lake 3 for the night in an attempt to answer positively to the question of any captures. I was woken up some time in the early hours to a screaming take – I actually had the fish over the landing net cord before it made a last bid for freedom, went through the other lines and slipped the hook. Whilst sorting the middle rod out the right hander tightened up and I assumed that the lines had been twisted together as the hooked fish ploughed through them, but it stayed tight as I swung the middle lead to hand and I knew a fish was on. It turned out to be an upper double, blank saver. I took a quick picture of it on the cradle as Matt was still fast asleep despite the disturbance in front of his brolly.  I decided not to recast the rods in the interest on a good night’s sleep (we were working the next day after all!) and, hoping that Matt would get a chance – which unfortunately he didn’t. 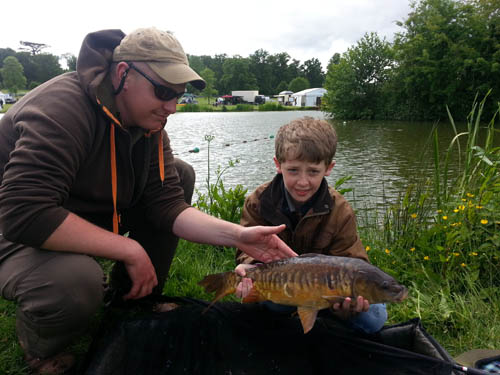 “Saturday was a much busier day with a non-stop flow of visitors to the swim. At least we could tell them that we had caught, or to put it in Matt’s words, “WE hooked a couple of fish last night, but ED managed to lose one of them!” Again the demonstrations went well for us and the Korda Carp Fest village seemed busy with a constant crowd around Danny Fairbrass and his angling talks. I ventured down to the bottom lake in the afternoon for a bit of surface fishing in front of the food court and dropped in next to Lee Taylor who had managed 40+ Carp in the day on match tactics.

“I managed to get a few fish feeding on top and helped a few young lads catch a Carp or two whilst an audience gathered to watch the fish slurping at the surface baits and share in the emotions of missed bites and hooked fish. 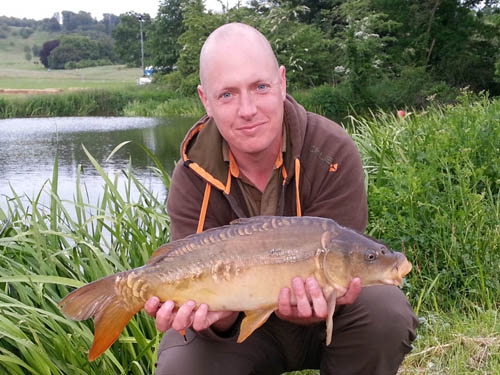 A few fish were caught on the Saturday

“All in all, I thought the show was a great success but, more importantly I think it showed massive potential for the future and I can see it growing into one of the biggest dates in the angling calendar. Thank you to everyone who attended.”