Throughout my angling career I have been fortunate to have fished, used and experienced some of the firsts. However, these days I’m generally a bystander so it was quite a shock when I was invited to accompany my good friend, Steve Weir to be one of the first English anglers to fish the world record holding Euro-Aqua Lake. 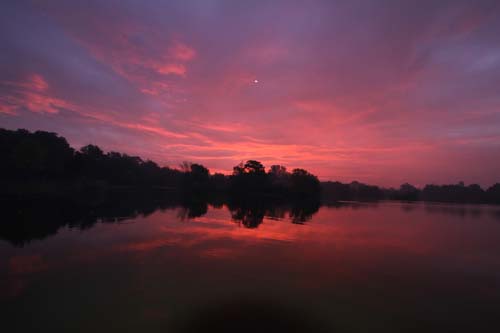 I had heard lots of rumours, gossip and comment about this water, but even I knew all of this was from an ill-informed or in most cases pure speculation view. I have my own mind and never listen to sheep, followers or clones. I like to make my own opinions regarding any aspect of Carp fishing and the only real way of doing this is by experiencing or at least witnessing first hand.

With the above in mind I gladly accepted Steve’s invitation and started to make plans for my coming trip.

The lake is located in Hungry and nestles in Bationion National Park approximately 120 miles from Vienna. It is a gravel pit not dissimilar to many we have in this country and is somewhere between 25 -30 acres – not a large lake by European standards. 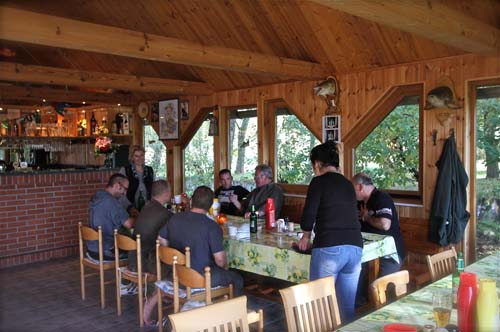 We arrived on Monday morning to be greeted by the owner, Alexander. It became very obvious that Alexander was very proud of his lake, its facilities and what he was trying to achieve. Whenever you go to a lake for the first time you are always a little apprehensive because, to be honest when I go fishing I don’t need reams of rules or any feeling I’m being watched. I’m old enough and mature enough to know what’s right and wrong and that’s just how he treated us, ‘as experienced anglers.’

He does have some basic rules like two rods, barbless hooks and the only bait you are allowed to use other than hook baits is his own. Alexander is a very experienced Carp angler and talking to him later in the week it soon became apparent he knew more about bait and Carp nutrition than most anglers in the UK. 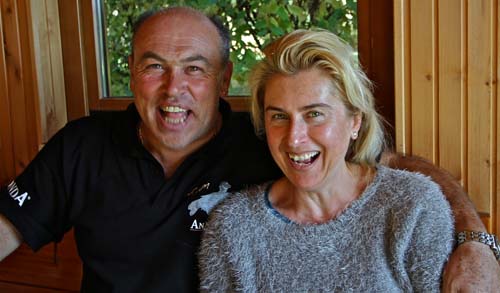 Thank You Alexander and Susan

Whilst travelling to the lake Steve and I had discussed tactics, but more importantly how we were going to treat the trip. We were on a diplomatic mission as well, because we were the first and it was our behaviour that would shape the way all English anglers are perceived.

Alexander had bought the lake back in the mid 90’s to use mainly as a retreat for his friends and family. He formed a small angling club later having responded to a request made to him by other eager anglers and that is pretty much how the lake has been run ever since. The only reason he has never had English anglers there before is just purely down to space, so to be invited as the first was really special. It’s like being part of a large family despite the language barriers; everyone sits down to breakfast and dinner each day regardless. The food is really good and the service is fantastic. My wife calls it clamping after glamping of course. 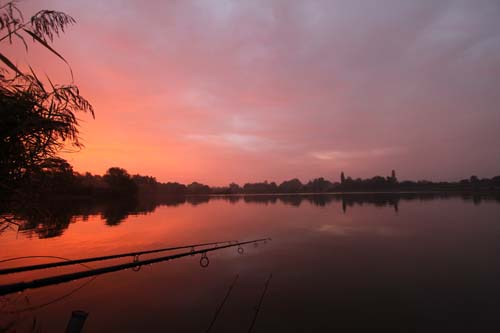 During the course of the week and after a patchy start the fish started to come thick and fast and to our surprise anything from doubles to low sixties. Just before we left the UK I had received a new set of 3lb tc Greys AirCurves with cork handles. Both Steve and I were using them and, to be honest I never thought I would find a rod in that class that was better than my X-Flites – I have now. The best way to describe their performance is the perfect balance between man and rod.

By Wednesday we weren’t really sure how many we had caught, but that didn’t matter – I don’t go fishing for numbers. The lake isn’t hard to fish, it’s clear of weed and the depths are very uniform. It is pretty much snag free and everyone is expected to cast and play fish to the bank, ‘proper fishing.’  Wednesday night was very eventful for all of us fishing that night, but for one it will never be forgotten. 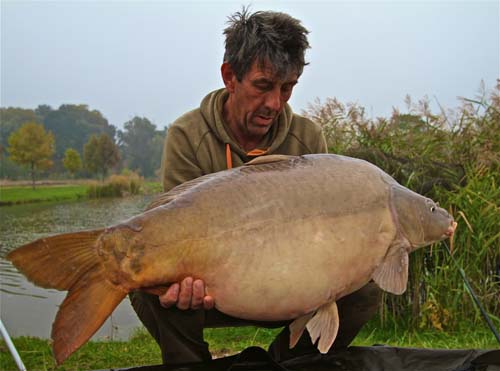 Fishing on the other side of the lake was Boris and Wilf – two Dutch lads that were on for the week. During the early hours Boris had a take and after a 55 minute fight had slipped his net under the biggest Carp ever caught by a Dutch angler at 94lb’s.

The following morning we witnessed the bell ringing ceremony. Now this sums-up what Euro Aqua is all about. If anyone on the lake catches a 30kg+ fish you get to ring the bell three times before breakfast. Everyone gathers around the bell which is situated outside the club house and watch as the lucky angler rings the bell. However, if you catch a 40kg + fish you ring the bell four times. Alexander is confident that in the next few years someone will ring it five times. The celebration doesn’t stop there because after dinner that day the lucky angler gets the chance to buy everyone a drink which we then toast to his success. That day the ritual was extended because Alexander then sung the Carp Fishermen’s song to Boris. It was in German so I didn’t understand any of it, but it just reinforced that family attitude. 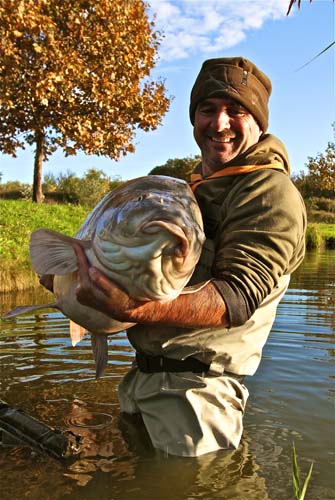 That day when Steve and I walked back to our swim, I can quite vividly remember him saying I want to ring that bell – a sentiment I certainly could relate too.

That night was quiet and we had to wait until just before dawn before I caught a fish that weighed just under 40lb. Shortly after I had another just over 30lb. Steve’s rods had remained silent that morning until just before 8.00am when the line lifted on his right hand rod. What followed was a slow take which he connected with instantly. Straight away he said it was a good fish. Some time later and after some spectacular lunges in the margin I netted the fish for him. “I think you can ring the bell with this one” I said. We quickly weighed it and settled on a weight of 76lb+ which made the trip. Steve deserved that fish and I’m sure his story is better told by him.

That morning the bell was rung by two different anglers – Steve and an Austria gentleman that was fishing on the far bank. He had come the previous day with another two anglers and between them they had caught several fish again up to 76lb.

This lake was becoming hard to really appreciate, the number and size of the fish was just mind blowing. I have fished lots of venues including Rainbow, but the stock in Aqua is just unique – there is nothing in the world comes close. 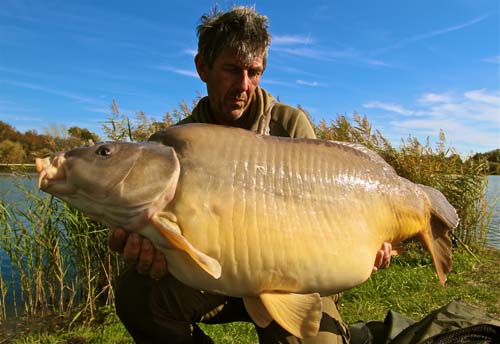 An Absolute Cracker Of A Fish

The rest of the week went quite quickly and we caught a few more, but nothing bigger than the 76lb fish. On the last evening Alexander came and sat with us and we talked until dark about his lake and how he managed the venue. Firstly all the gossip I had heard was wrong and the lake is run exceptionally well. We were made to feel like family and the facilities are five star. The fish are only the size they are due to very good water management. The lake won’t be to everyone’s taste – it is quite commercial, but I’m now of an age that I like my comforts, I can live with power in every swim and my own fridge.

I’m sure this won’t be the last piece of literature you will read about this lake, but it will be the first from an English angler that has actually been. Thanks to Steve for inviting me and Alexander and his lovely wife for making us feel so welcome. I will be going back.

3 Responses to A Trip To Euro-Aqua